GILBERT & SULLIVAN The Pirates of Penzance

"a superb cast of principals, a first-class orchestra and a fine chorus" - The Gramophone

This new transfer is taken from immaculate pressings of the 1971 LP reissue (as reviewed here). It was indeed a superlative performance, nicely recorded with subtle and sensible use of stereo and very occasional and tasteful inclusion of minor sound effects. As has often been the case with recordings of this era, an apparent sonic veil over the voices has been lifted by the 32-bit XR remastering process, bringing a vibrance and immediacy to the sound and a clarity to the all-important words of W. S. Gilbert.

The duration of the recording allowed me to revisit Pristine's 2009 release of Sullivan Cylinder recordings, two of which hail from The Pirates of Penzance and have been programmed here as "interval music" at the end of Act One on CD 1. At the time of transfer and remastering there was no available technology to allow an assualt on the wow and flutter which bedevilled a number of those very early recordings, but the development of Capstan software in 2011 means a further improvement in sound quality is now possible, dealing with this precise issue. All of the cylinder recordings suffered from pitch drift of one kind or another, and some had particularly bad flutter issues, all of which here have been either resolved entirely or much improved. It is indeed amazing to listen to these wonderfully clear early recordings, which just overlap the life of their composer, and recall that all of them pre-date not just the First World War, but also - by over a decade - the recording microphone. 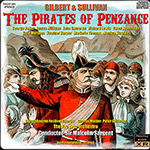 Hitherto, in their series of Gilbert and Sullivan opera records with picked casts and Sir Malcolm Sargent conducting, H.M.V. have been content to give straightforward "concert" versions with no attempt at the greater realism made possible by stereo, other than that of added spaciousness and some degree of positioning. Here they introduce effects designed to give a greater sense of the atmosphere of the stage as well as suggesting both movement and positioning. This is apparent immediately after the overture when the curtain goes up to the opening orchestral bars leading to the first chorus. Over the orchestra comes a crescendo of conversation and laughs from the crowded stage before the chorus begins to sing. One senses, as it were, the raising of the curtain as one did for the first time so far as I remember in the Decca/Stolz Merry Widow of two years ago.

I am all for this sort of thing so long as it does not descend to mere gimmickry, and of course it does not here. The new possibilities are exploited with discretion, and they demonstrate as little else could the benefits of stereo, very good indeed as the mono version is within its limits. It is in such things as the glorious "Paradox" trio, the lovely duet for Mabel and Frederic, "Ah, leave me not to pine", beautifully sung by Elsie Morison and Richard Lewis, and the superbly rippling accompaniment to the Major-General's song "Sighing softly to the river" that stereo comes into its own musically. Without undervaluing by one iota the fine singing and excellent characterisation of the other principals Pirates revolves around Major-General Stanley and here is magnificently portrayed by veteran George Baker. In stereo one can almost see him sitting in the moonlight under the arches of the ancient chapel muttering over his ancestors. Incidentally, I do not recall ever hearing Mabel's song "Poor wandering one" as well sung as it is here by Elsie Morison.

A comparison with the D'Oyly Carte recording of two years ago is inevitable, I suppose, and as this was made before Decca started their policy of including dialogue I have not that distinction to help me out this time. The answer must be quite firmly that musically this new recording is substantially the better of the two, and well worth the extra cost. But if you must have all the traditional bits and pieces without exception then the Decca set is a very good one.

At the new, cheaper price this set is to be welcomed with enthusiasm. It is the most musical performance of the Pirates that we have ever had on records. Having heard every complete recording from the first in the early 1920s I can say this with some authority. Sir Malcolm Sargent was a great conductor of Sullivan's operettas and here he has with him not only a superb cast of principals, but a first-class orchestra and a fine chorus. Incidentally, this was the first record in this series to exploit the potentialities of stereo to create atmosphere, positioning and movement.

Musicality, however, does not deny us anything of the humour. George Baker, Owen Brannigan and James Milligan see to this. The hero, of course, is George Baker, who was 75 when the recording was made. His verve and the immaculate clarity of his diction in the famous patter-song are something to marvel at, as also, by the way, is the beautifully rippling accompaniment to his "Sighing softly to the river". Being a reissue I am told I must be brief, but I cannot resist calling attention, as I did in January 1961, to the beauty of the duet "Ah, leave me not to pine" as sung by Elsie Morison and Richard Lewis, the former's brilliant "Poor wandering one", and the splendid "Paradox" trio among other jewels. The sound is still remarkably fresh, immediate and realistically balanced.

W. A. CHISLETT, The Gramophone December 1971