“A revelation .. a monumental achievement” - The Gramophone

Karl Richter's classic 1958 St . Matthew Passion is a fabulous demonstration of just how good some of the earliest commercial stereo recordings of the late 1950s could sound. It appears on the Pristine label almost by chance - chosen as listening material whilst testing new LP replay equipment, I was so drawn into the music that I couldn't help but let it run, and run. All eight sides of it demonstrated to me how much superior the best vinyl pressings of the pre-CD era sound by comparison to almost every modern "vinyl revival" LP I've heard thus far.

Thus I had marvellous source material from which to work: XR remastering has served to "warm up" the sound, as well as dusting off the upper-end cobwebs, whilst the tape hiss which has bothered listeners to earlier reissues has been all but eliminated. The lightest touch of convolution reverberation, which reproduces the acoustic space and characteristics of a real selected concert hall, has served to soften some of the rougher edges of DGG's early stereo sound and bring an extra sense of depth and realism to the proceedings. 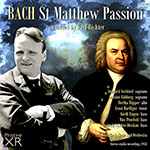 Unquestionably the finest of his interpretations of the work on disc ... those new to this classic recording will enjoy the sympathetic restoration here.

Karl Richter played the harpsichord in the 1950 recording of excerpts from the Mass in B Minor directed in Leipzig by Günther Ramin. Ramin held the same position at St Thomas that Bach had done. That Richter absorbed much from his eminent but now somewhat overshadowed teacher seems self-evident from the famous studio recording Richter gave of the Mass in 1961, a cornerstone of the LP library. The stylistic lineage is perhaps even more clear from the recordings both men made of the St Matthew Passion.

Ramin’s was severely abridged with many omissions – some, indeed many, standard Leipzig ‘cuts’ at the time - which enables the work to fit on two CDs. Made in 1941 with the St Thomas Choir, the Gewandhaus Orchestra and some of Germany’s leading singers, it remains a remarkable document. It’s clear from the approach adopted by Richter in his famous recording of 1958 that the expressive balances and stylistic approach explored by Ramin had been securely passed on – tight rhythms but with relaxed tempos (sometimes very relaxed) with crisp, small ensembles, and a richly warm emotional engagement. His opening chorus which, remarkably enough, is slower than Mengelberg’s is also a full minute slower than – but expressively congruent with – Ramin’s 1941 reading. Thus it is for much of this 1958 recording, one that by common consent eclipses the other studio and video recordings Richter left behind. With a more appropriate sense of articulation and a roster of first-rank soloists largely in fresh voice this is unquestionably the finest of his interpretations of the work on disc and one that still stands comparison with most others of the LP era.

In Ernst Haefliger he had one of the great Evangelists on disc and the enormous advantage of Fischer-Dieskau’s bass solos. Irmgard Seefried is a splendid soprano, though not always quite ideally steady, and Hertha Töpper the reliable alto. His well-drilled Munich instrumental and choral forces are resilient and attentive to his demands, some of which can be rigorous and indeed onerous, when it comes to certain tempi decisions. But all these decisions are far preferable here than in later recordings.

As Pristine’s Andrew Rose observes in his brief producer’s note, this early stereo was excellently recorded. Light ‘warming’ of the sound has been judiciously applied and some reverberation too: this won’t be to all tastes, and certainly not those who prefer more of a facsimile of the original sound – in which case one of the many reissues, not least DG’s own, will be the preferred option. However those new to this classic recording will enjoy the sympathetic restoration here.