Mainardi and Haendel on top form for these excellent studio recordings

XR remastering by Andrew Rose at Pristine Audio, September 2011
Cover artwork based on photographs of Enrico Mainardi and Ida Haendel
Pristine Audio is grateful to Al Schlachtmeyer for the generous donation of the Haendel discs
Total duration: 69:00 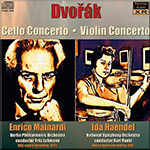 Her playing of the finale’s folk incidents, and associated crisp chording, is a pleasure to hear

These two concerto performances make contrasting claims on the listener. Ida Haendel’s 1947 recording of the Violin Concerto was made in Kingsway Hall, accompanied by the pick-up National Symphony Orchestra under Karl Rankl. This was composed of first-rate musicians, but they didn’t always form a first rate orchestra. There are moments of rhythmic uncertainty, and a slight feeling of under-engagement from time to time which, whilst hardly an impediment to the soloist, means that the recording as a whole is slightly less impressive than it might have been. Haendel’s tone is quite fervent, but it’s well controlled, and never seems out of scale - albeit her vibrato has a tendency to seem a touch fast on occasion. Her phrasing is eloquent, maybe a touch unidiomatic at a few paragraphal points, but her playing of the finale’s folk incidents, and associated crisp chording, is a pleasure to hear. Dutton issued this recording well over a decade ago, as part of an all-Haendel disc - the Tchaikovsky with Basil Cameron was the other main work. The transfers represent the divergent aesthetics of these two labels - a somewhat dampened treble from Dutton, a more expansive top to bottom range from Pristine.

I know two of Mainardi’s other performances of the Concerto. I’ve reviewed the live one with Jochum on Tahra 638-39; then there’s the wartime inscription with van Kempen and the Staatskapelle Berlin, on 78s. On neither of these occasions has he ever much impressed. He always started with a sluggish, wan, almost sullen first entry, and things progressed from there. It may chart some kind of emotive development for him, but it rather flies in the face of the composer’s express markings He never had an especially beautiful tone but he was always a tactful player, even if he is raspily-toned here in places and his downward scale is ponderous. In fact Lehmann and the orchestra prove to be luxury casting - outstanding winds, commanding bass line - and rather upstage the dogged soloist. It’s telling that one listens to little rhythmic emphases from Lehmann and to the contributions from the orchestra’s principals with as much interest as one does to the soloist. I do admire Mainardi - just not in this work.

Coupling historical performances like this makes some sense, but to saddle a good performance of the Violin Concerto with a rather (soloistically) nondescript one of the companion work will cause problems for potential purchasers.