This is the second of two volumes taken from three ten-inch HMV LP issues of the early 1950's, sent to me in near-mint condition for restoration by Nicolas Hawtrey. They were replayed using a Benz Micro moving coil cartridge, custom-tipped by Expert Stylus Ltd. with their exclusive Paraglide stylus, the result of many years work and research into the ultimate diamond shape and size for the reproduction of mono vinyl. I used two distinct and very different solo choir recordings to create a broad reference for re-equalisation of the LPs, which in their original incarnations required a certain degree of fine-tuning. 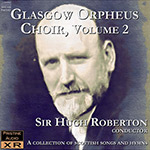