Beecham's original and - for some - still the best Zauberflöte

Now in superb XR-remastered sound quality in this new transfer

This, the first 'full' recording of Mozart's Die Zauberflöte, was originally planned as a Glyndebourne recording under Fritz Busch, as with the previous three instalments of HMV's Mozart Opera Society series. When the recording, planned for summer 1937, was abruptly cancelled, there was some surprise in the Glydebourne camp – surprise which must have turned to considerable annoyance when the reason became clear: producer Walter Legge had lined up Sir Thomas Beecham and a top-line cast and orchestra in Berlin instead.

Glyndebourne's loss, however, was our gain, and this production continues to set a benchmark to this day. It's no surprise, therefore, that of the commercial recordings of the era it's been one of the most-requested for the Pristine XR treatment, despite its continued availability on a number of other releases and transfers.

How does this transfer stack up against the competition? Well I admit I've not heard them all - and of course I'm biased (which is why there's a lengthy sample on this page). By comparison to the EMI CD issue the sound is much fuller, immediate and open - the slightly lower background noise from the EMI issue can be at least partially accounted for by the myriad missing frequencies. The Nimbus issue - on the basis of the one track I've compared - is distant, almost acoustic-sounding, and dreadfully crackly, as if from an entirely different era. I actually used Mark Obert-Thorn's 2001 Naxos transfer as a tming reference for side changes and make no apologies for shamelessly stealing his track mark points. But the last decade has seen dramatic strides forward in remastering technology, and he'd be the first to expect some improvement over what was possible when his transfer was carried out:

XR remastering has done much both to bring more immediacy and realism to the orchestra and singers, and to open out the upper end harmonics previously rolled off into the noise of the recording as was the case with all commercial issues of the period. Lower overall noise levels have been achieved, too, though I've used as light a touch as I could with noise reduction in order to preserve as much fine musical detail as possible. Pushing the noise reduction any further began to suck life out of the recording – including the life which had only just been restored to it.

I used two sets of discs to put this together, both in near-mint condition. The second set stood in where transportation and storage had caused irreparable damage to the shellac of the primary set (a snapped disc is a snapped disc...) – both sets delivered excellent transfers. Swish was evident through a good number of the 37 sides but has generally been straightforward to treat.

In 1938 the Gramophone reviewer characterised the original release as being well worth waiting for - "better late than never" was the headline. For those who wrote asking for me to restore this recording, I hope the same can be said of this issue today. Take a listen to our extended sample and hear for yourself – I think it's all come out rather well. 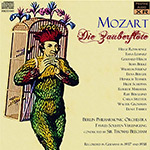 "Technically, the recordings leave little or nothing to be desired the former high standard is maintained. Voices are well-balanced against each other and against the orchestra and details are commendably clear....

The Queen of Night requires a faultless coloratura technique combined with the vocal gifts of a dramatic soprano. This dual qualification makes it difficult to find really satisfactory artists for the part. Erna Berger is a success....

Of the male artists, Gerhard Hüsch stands out as an admirable Papagcno, giving due weight to the meaning of every phrase he utters and maintaining a uniformly high vocal standard....

The excellence of the duets and ensembles is very gratifying and calls for praise not only for the major principals, but for the artists who undertook the parts of the three ladies, the three boys, the men in armour, etc.

That The Magic Flute is extremely popular is evident from the large number of advance orders received for this recording of it. Those who have an affection for the work need have no hesitation in subscribing for these records. The latest issue of The Mozart Society is a worthy recording of a worthy performance and one that does credit to all concerned in its production."

What I had forgotten was the weightiness of Beecham’s reading. The powerful first chord rings out with almost Wagnerian solemnity

We have come to expect impressive sound from Andrew Rose’s XR re-mastering and he has ensured both clarity and dynamic power. I haven’t listened to this set for quite some time - not since the LP era in fact although I have heard some re-mastered excerpts, but I wasn’t prepared for such ‘modern’ sound. Without knowing the origin I would have guessed it was a good mono recording from the 1950s. So on these grounds alone this set can be heartily recommended to all lovers of Die Zauberflöte. Keep in mind, though, that it was recorded without the spoken dialogue. This means that the individual numbers come in quick succession, very much as they wound do on a highlights disc.

What I had forgotten was the weightiness of Beecham’s reading. The powerful first chord rings out with almost Wagnerian solemnity and this is an impression that prevails throughout the overture. Even the quick second half has more dramatic weight than Singspiel jollity.

This impression is reinforced when we are confronted with Helge Roswaenge’s Tamino. Roswaenge was known more for his brilliant top notes and dramatic heft than lyrical flexibility and elegance. Here one associates the results more readily with Wagnerian effortfulness than Mozartean warmth. He is closer in approach to Siegfried than to Tamino. I must qualify this verdict to some extent. In Dies Bildnis ist bezaubernd schön he is more nuanced and actually quite lovable. Maybe he was inspired by Gerhard Hüsch’s famous reading of Papageno and his interpretation of Der Vogelfänger bin ich ja, which was heard just before the Tamino aria. Listening closely to Hüsch I have to admit that there are baritones from more modern times who have imbued the aria with greater spirit and/or elegance. Dietrich Fischer-Dieskau and Walter Berry are two singers who, in their contrasting ways, have come closer to the character. Hüsch feels ‘every-day-penny-plain’. He is much better later on in the opera and in particular in Ein Mädchen oder Weibchen, where his Lieder singer experience and care for words is a great asset. And the suicide scene is deeply moving.

Erna Berger was also a quite successful Lieder singer towards the end of her career in the 1950s. I still treasure a couple of Deutsche Grammophon LPs with her. More than fifteen years before that she was a brilliant Queen of the Night. In her first aria she also displays a warmth that makes ‘die sternflammende Königin’ more human. Her runs are occasionally smudged and a couple of her top notes are slightly out of pitch. This is however a worthy reading of this exacting aria and Der Hölle Rache in the second act is sung with awesome accuracy.

Tiana Lemnitz is a lovely Pamina, some scooping apart. The duet with PapagenoBei Männern is one of the highlights of the recording and her aria Ach, ich fühl’s is lovely and sensitive. Wilhelm Strientz is a lightweight Sarastro but sings with great warmth and has the required low notes. Both his arias are good. His legato in In diesen heil’gen Hallen is admirable - and so is his diction. Walter Grossmann is a warm and fatherly Speaker and in the musically remarkable confrontation scene between him and Tamino, Roswaenge is at his most heroic with biting defiance. Heinrich Tessmer is a splendid Monostatos.

I find that Pamina and Tamino are a curiously mismatched couple - especially in the Der, welche wandelt scene: she delightful as a lily, he knotty as an oak-tree.

In spite of some misgivings this is still a desirable recording. When it was new, more than seventy years ago, it must have been a revelation to many. Berger, Lemnitz and Hüsch can stand comparison with some of the best singers on modern sets and most of the others are more than acceptable.

For a comparable modern recording without spoken dialogue, Klemperer is a first recommendation with Gundula Janowith (Pamina), Lucia Popp (Queen of the Night) in her first recording, Nicolai Gedda (Tamino), Walter Berry (Papageno) and Gottlob Frick (Sarastro). Elisabeth Schwarzkopf and Christa Ludwig are luxury casting as First and Second Ladies. For complete recordings with dialogue Karl Böhm’s DG set, roughly contemporaneous with Klemperer, is still my favourite: Fritz Wunderlich (Tamino), Dietrich Fischer-Dieskau (Papageno), Franz Crass (Sarastro) and Hans Hotter (Speaker) are top contenders. Evelyn Lear (Pamina) and Roberta Peters (Queen of the Night) are not quite in their league. I also have a soft spot for the Wolfgang Sawallisch version. With remarkably refurbished sound this Beecham set should find an honoured place as an historic alternative in many a collection.