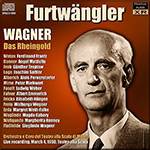 Now that Andrew Rose of Pristine has gotten around to it, the result achieves a level that frankly I never thought possible

Different restoration engineers keep improving the Furtwängler/Scala Ring cycle, and now that Andrew Rose of Pristine has gotten around to it, the result achieves a level that frankly I never thought possible.

For many years the Rome RAI set was preferable because of superior sound quality. It was, after all, produced for radio broadcast. In addition, the performers were able to retain freshness throughout, since they were only performing one act on any given evening, and they did not have to trouble themselves with stage business. Some of us always had a sneaking suspicion that the Scala performances were more satisfying, because they had that sizzle and specificity of inflection that comes from fully staged performances of music dramas, but the limited sonic reproduction made it hard to really enjoy them. The first release of the Scala Ring that provided real listening pleasure was the Archipel (a label with an uneven history, but one that did a fine job here). Now, however, things have moved up yet another whole level.

Any of those earlier reviews, easily locatable on the Fanfare Archive, will give you the specifics of why I believe that anyone seriously interested in The Ring must know Furtwängler’s performances, and why I think that of the two the Scala set is preferable. If there ever was any doubt of this, Pristine Audio’s transfer removes it. This is, in fact, a remarkably lifelike reproduction of a performance that when first heard decades ago on a poor LP transfer seemed like something one would never actually be able to take much pleasure in. By the time you read this, the entire Ring cycle will be available from Pristine, and it is urgently recommended even if you own one of the earlier transfers. I have listened to it in both monaural and the XR stereo versions (this release is in the latter)—both are satisfying. I slightly prefer the XR stereo—which is not at all like the fake stereo of the 1970s, but simply a way of allowing the ambience to feel more natural.