One of the great recording of the 20th Century - Gould's Golberg Variations, XR remastered

" There is no doubt whatever in my mind that Gould is superior in every way"
- The Gramophone, 1958

With two piano versions and two harpsichord versions, competition is now equal, at least numerically. As A.R. left the matter, in his review of the Leonhardt performance, the better of the two harpsichord versions was Landowska’s. Of the two pianists, there is no doubt whatever in my mind that Gould is superior in every way. Some of his tempi may be fast, but his is a speed connected with urgency more than with show or brilliance. He carries a phrase through a gigantic upward or downward sweep, effortless, controlled, and clear as crystal. Those listeners who, unlike Count Kayserling, fall asleep rather than keep awake through this forty-five minute ritual, will have no difficulty in keeping their eyes and ears open when they play this new Philips recording.

Gould has some of the clearest keyboard counterpoint I have heard for a long time and (unlike Demus) is sparing in his use of the pedal. Compare, for instance, the two versions of Variation 11, or of 14. In both cases Gould is faster, but the odd thing is that he is also clearer. Demus produces a thick, rather muddy sound, makes too much of descending bass figures, and plods rather than plays. Sometimes I found it hard to believe that two corresponding variations were really the same music!

The Philips disc is helped by really splendid recording, with the piano tone full and sonorous, yet capable of the fine expressiveness required for Variations 21 and 25. This is a performance that I shall treasure, for it has the kind of architecture in tone which is often longed for but rarely found.

Glenn Gould's legendary 1955 recording of the Goldberg Variations needs no introduction. From the very first it was recognised as a classic - not just in the review reproduced here, but two years earlier in Harold Schonberg's "Letter from America", in which he wrote a single line: "An interesting Columbia debut is that of Glenn Gould, a young Canadian pianist who played Bach's Goldberg Variations with some original ideas that never sound eccentric."

On more than one occasion I've been asked whether it might be possible to excise Gould's extraneous noises, to which the answer is, in some cases, yes, in others, not yet... In this new XR remastering this was not the aim, though some have gone. Rather, my intention was to improve the sound of the piano. My hope was to find significant tonal improvements - an A-B comparison with the best existing transfers suggests this has been achieved, with the piano now appearing as a full, three-dimensional instrument where before it was rather flat and dull.

I resisted the temptation to pad out this release with extra material. This is the Gould Goldberg, and it's never sounded better. 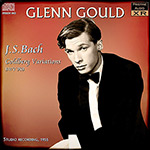 It was in any case always good but here certainly sounds fuller in Ambient Stereo...

It would be otiose to attempt a detailed critical commentary on this iconic, landmark recording by the 22-year-old Glenn Gould. Most admirers will already own this, the alpha version, and also the omega of 1982, made just before his death at fifty. They are both essential listening to those who can tolerate Gould’s vocalise and interpretative eccentricities; those who cannot will already know to leave this alone.

Most previous issues from Sony and Naxos have either supplemented the Goldbergs with some complementary pieces such as fugues or a Partita, or have paired the two recordings. Pristine choose here to leave the Variations unadorned at a mere 38 and a half minutes, Gould having chosen the first time around to ignore repeats. That might seem unduly parsimonious or reverential to some collectors. However, sound engineer Andrew Rose has marginally reduced some of the extraneous noises and enhanced the depth of the original, mono piano sound. It was in any case always good but here certainly sounds fuller in Ambient Stereo.

Unfortunately, as a corollary to that process, the thuds and thumps of the original have become more pronounced. I am not sure that I do not prefer the slightly drier ambience of my 1992 20-bit re-mastering from Sony; indeed I have become so used to it that I fancy Gould’s conception is better served by the slightly more distanced, mono sound.

In short, if you already own this in a previous Sony incarnation, I wouldn’t rush to replace it with this from Pristine. Convert though I am to the Ambient Stereo re-mastering process, I do not think that on this occasion I would recommend this Pristine issue over the one from Sony.