Massive sonic overhauls from the vocal gems that launched a legend

This recording of Lucia di Lammermoor was Maria Callas's first opera for EMI, and one of very few of her classic 1950s EMI opera recordings not made in Milan with the orchestra and chorus of La Scala. It was her second full opera recording, and only her third official studio recording session. Despite some major cuts in the score, it was hailed on its release, with A.R. writing not only praise for Callas in his review in The Gramophone: "Much credit is due to Tullio Serafin for his admirable direction of the opera and to the engineers for a most excellent recording".

From a technical perspective the original recording is interesting. Despite at times being apparently unremittingly dry, occasionally we do get a sense of space and acoustic. Equalisation favours clarity of voice above all, and there is a real lack of depth in the sound (and, it turns out, a lot of murk and muck in the lower registers). Working on these two areas in particular rounds out the sound of the male voices in particular, making their previous incarnations sound somewhat impotent, as well as giving the orchestra a far more convincing presence. But of course it is Callas who shines here, and with the slightest cushioning of real opera house acoutics (in this case I found the Sydney Opera House to offer the most accommodating sound without sacrificing the clarity of the original recording) she sounds more ravishing than ever.

A quick note about the early Callas recordings: in cleaning these up I discovered low-pitched 50Hz mains hum which suggested an unusually high orchestral pitch (A4=-~460Hz) running throughout the three direct-to-disc 78rpm sessions. Repitching the recordings from standard 440Hz by using this reference immediately relieved them of an unusual heaviness of voice and sounded very convincing. Despite this reamrkable degree of sharpness I elected to believe that what my measurements and ears were telling me was indeed correct. 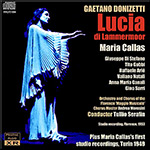 In Fanfare 28:6 I reviewed a release of this performance on EMI. It was digitally remastered by engineers who had no idea what the voices sounded like, and the sound was simply awful. In the same issue George Jellinek reviewed this performance that was issued on the Naxos label and stated that it was audibly acceptable. He pointed out that “Serafin observes all of unfortunate cuts of his disrespectful era, including the intense Wolf’s Crag confrontation between Edgardo and Enrico.” In Fanfare 34:1, Bart Verhaeghe reviewed still another issue of this performance on Brilliant and praised the sound quality. I certainly agree that conductors of that era had little respect for the geniuses who created operas. It was a time that bel canto had been replaced by con belto, and operas of the old period were always cut to pieces. This performance gives us three wonderful singers, Callas, Di Stefano, and Gobbi, and it is a shame that they were not allowed to perform the whole opera. This recording has as I mention above been released before more than once. The only reason for any collector to purchase this release is if they don’t have any copy of the arias from her first recording session. The sound quality on this set is quite good. The only notes are about the transfer and are on the inside of the cover, and it is stated that full program notes can be found online.

A lot of hard things have been said about Donizetti's Lucia di Lammermoor, some of them justly; but, given a performance of the quality we have here, there is plenty of life in the old opera and, once Lucia herself comes on the scene, it is often very moving and always enjoyable, in spite of the librettist's hash up of Walter Scott's novel.

The weakest part of the opera is, fortunately, the first scene of all. The orchestral IntroductIon, impressive enough, is followed by a conventional chorus, ending with the stage direction "exeunt rapidly" : but not a moment too soon! Tito Gobbi does his best to make a living person of Sir Henry Ashton, and throws in a top G for good measure, but nothing can really animate this lay figure. The conversational exchanges and Gobbi's Cavatina are rather too loudly recorded and a much better balance is attained in the next scene, by the fountain, in which Lucia makes her first appearance. There is that rather naive business with the harp, by way of establishing "atmosphere", and then comes Lucia's solo Regnava nel silenzio, sung with a lovely legato by Maria Callas, who has already, one need hardly say, established Lucia, in the recitative, as a person of character. She ends the aria with a beautifully executed cadenza, displaying those wonderful rich high notes of hers, but preceded by some rather bumpily recorded trills—the only place one can say this of them. Quando rapito, with its exquisitely done decorations, and finely moulded sequences, completes one's utter enjoyment of what is clearly going to be a great performance of the part. Stefano, who now appears, uses his fine voice more circumspectly than in I Puritani and the ensuing duet, with a thrilling entry by Callas at "Deh, ti placa", is most enjoyable. Both artists excel in the singing of Veranno a te, which it is silly to write off as a commonplace waltz. It can only be made into that by the adoption of the wrong tempo.

After the duet between Ashton and Lucia (Callas puts a wonderful amount of pathos into her singing of "0 Ciel") the aria of Raimondo (Bide-the-Bent) is cut, and Arié has to wait for his chance until later in the opera. The cuts throughout are, indeed, extensive.

The celebrated Sextet, Chi mi frena, is preceded by one of the funniest remarks in opera, Lucia's "Tis Edgar ! Oh thunderbolt", disguised for most of us, in the Italian text, as "oh fulmine". The Sextet may seem small beer compared to the Rigoletto quartet, or the Meistersinger quintet, but it is undeniably effective sung with such an excellent ensemble—how cunningly the orchestral start, pizzicato, fixes one's attention—and the contract episode is most dramatically presented. The first scene of Act 3 (A Hall in the Castle of Ravenswood) is cut and the act begins with the festive music of the next scene, a Hall at Sir Henry Ashton's Castle. A tribute may be paid here to the unfailingly lively singing of the chorus. Arié sings a brief aria well and is followed by the tuneful chorus "Oh! qual funesto", in which he joins.

And now comes the great moment, the Mad Scene. Sutherland Edwards pointed out, many years ago, that the heroine of Lucia can go mad in two different ways. Patti, Nilsson, Albani (we can add Melba) did not rave, were not "insanely eccentric, scarcely ever flighty". They were regretful, moonstruck, with a poetry not unlike that of certain Nocturnes by Chopin. He continues that Jima de Murska, a famous singer of his day, took quite another line and behaved like a lunatic who at any moment might become dangerous, though remaining, naturally, in perfect control of her voice!

Callas's impersonation lies somewhere between these two. It is filled with the deepest pathos (as in her singing of "Alfin son tua", in the section beginning "Ardon gli incensi", which is quite unforgetable) and it has an impulsive, excitable note in it that conveys the derangement of the poor girl's mind. With all this goes the most superb vocalisation. In the cadenza before Spargi d'amaro, Callas knocks the flute out and we hear him only as a little timid tootle in the background. Here is certainly some of the finest singing of our time, and there is one moment in the repeat of Spargi d'amaro when the voice is recorded with all the actuality of three dimensional sound. It is startling. After the final thrilling E flat I had (this is a joke now with my friends) to take a turn in the garden to cool down!

It is rough luck on Edgardo to have to follow on such an achievement : but without any straining after effect Stefano sings his celebrated aria Fra poco a me ricovere very well : and in the later scene, when he stabs himself, his singing, to a beautifully played 'cello obbligato, is very moving. Much credit is due to Tullio Serafin for his admirable direction of the opera and to the engineers for a most excellent recording.