Both of these recordings were essentially very well made, and these new transfers have, with XR remastering, built on very fine originals a clean, clear and full sound that in both cases might have been recorded just last week, rather than more than fifty years ago. One problem did rear its head in the second movement of the piano concerto, where cuts between takes caused considerable jumps in the stereo soundstage's intended centre image. These I have attempted to ameliorate as much as possible, though the careful listener on headphones may still spot the joins.

That said, this is unlikely to detract from these wonderful performances and recordings.

*Download only:  due to lack of space on the CD disc, these tracks are download-only. They are included in all downloads. 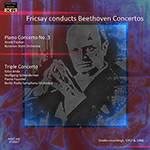 A memento of treasurable artists at their very best.

Combining two Beethoven concerto recordings by Ferenc Fricsay is a splendid idea. As we know from his striking and individual “Eroica” in his Great Conductors of the 20th Century set, Fricsay is a Beethoven conductor of passion and brilliance. His Third Piano Concerto with Annie Fischer is a great recording. The two Hungarians have a heightened rapport with each other. Fricsay’s opening tutti in the first movement is vigorous and lyrical at the same time, with a contrast of light and shade as in an etching. Fischer takes up this mood with a big but beautifully articulated sound. She employs just enough rubato to give the music a sense of flow. The movement is absolutely con brio, with Fischer and Fricsay creating drama even in quiet moments. Her cadenza is an immense accomplishment, exhibiting the quality of the improvisations Beethoven was famous for. Fischer establishes a rapt mood at the start of the Largo. As the movement proceeds, her playing acquires the charm appropriate to a light, romantic episode. Fricsay’s accompaniment is full of subtle colors. The Rondo begins with the music being propelled along, though with no heavy-handedness. Fischer’s playing sparkles. The music making here combines depth with energy. The coda is like a gemstone in a perfect setting. Andrew Rose’s remastering is excellent, achieving a sense of both space and color. He has left in just enough tape hiss to preserve tonal vibrancy. As he notes, intercutting between takes in the Largo causes the image of the piano to shift at times, but this is not unduly disturbing.

The recording of the Triple Concerto is justly famous. Fricsay sets a spacious tempo at the start that brings out the majesty of the opening movement. The exchanges between the soloists are civilized and gently Romantic. Schneiderhan and Fournier could not play more elegantly. Anda’s contribution here is more propulsive and agitated, what we think of as traditionally Beethovenian. In the Largo, Fournier’s entrance is the stuff of legends. The trio blends beautifully, taking the lead away from Fricsay. The concluding Rondo possesses a winsome quality. Schneiderhan plays with a gloriously singing tone. The development section’s Polish rhythms are brought out by all concerned. The work’s conclusion has dash, élan, and, what’s more, wit. I have the LP of this recording, so I was able to hear what Andrew Rose did in his remastering. He has increased substantially the air surrounding the performers. The balance among the soloists is improved, as is that between the trio and the orchestra. The tone quality of the Berlin Radio Symphony here is truthful to what we hear on their broadcast recordings under Fricsay. I enjoyed Rose’s rather interventionist take on this recording very much. That said, I still prefer the LP. Its up-close perspective on the performers enhances the chamber music feel of this score. Most importantly, the tone quality of the instruments is so much richer that at times I feel like I’m hearing a different performance than the one on the CD. If you only want this recording on CD, Rose’s edition will do, but to really experience what the artists have accomplished you need the LP.

Other renditions I like of the Third Concerto are the remastered version by Alfred Brendel with James Levine, which I prefer to Brendel’s final recording with Simon Rattle, and the CD by Peter Rösel with Claus Peter Flor. Karajan’s disc of the Triple Concerto with Richter, Oistrakh, and Rostropovich certainly is the equal or greater of Fricsay’s, not least for the increased intimacy in the Russians’ playing. I once heard a gorgeous account of the Triple Concerto in concert with the Kalichstein-Laredo-Robinson Trio and the New Jersey Symphony, Jaime Laredo demonstrating remarkable conductorial control over the orchestra while playing his solos. If you don’t know the Fricsay recordings of these concertos, by all means get this CD. It is a memento of treasurable artists at their very best.