"Rozhdestvensky and the Bolshoi Theater Orchestra musicians have this score in their blood, and adore Prokofiev’s music" - Fanfare

Rozhdestvensky's complete 6-LP-sided 1959 Moscow première recording of the complete Romeo and Juliet ballet followed a number of outings of the work in its cut-down suites as it started to become more widely known. Reading through the various mentions it has received since then in reviews it seems to have retained a high musical reputation ("The most characterful of them all" - Gramophone, 2013), despite some technical shortcomings. Certainly Melodiya pressings were never the best!

But rather unusually for an orchestral recording this late in the 1950s it was made in mono, and had a rather restricted and harsh edge to the sound. This I've managed to tame considerably, alongside a more general opening out of the sonic palette, something that's particularly enjoyable with the extra space on the soundstage offered by the Ambient Stereo issue of this recording. I've also been able to add a sense of depth and fullness that was lacking in the Melodiya issues.

Finally I've fixed a curious anomaly found at around the point where Mercutio dies - a short section of reversed music that appears on all Melodiya issues from the LPs onwards that I've managed to source. This is the second instance of this I've discovered in Melodiya recordings of the era, which seems more than coincidental - though one can only guess as to the reasons for it. In this instance a short section of the music was actually missing once the reversed section had been corrected - a beat has had to be inserted from another recording to cover this gap, though it shouldn't be noticed by any but the most perceptive listeners. 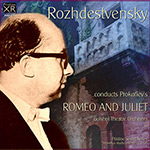 A miracle in sonic restoration

In 1959, the Moscow Bolshoi Theater Orchestra and Gennady Rozhdestvensky made a Melodiya studio recording of the complete score of Prokofiev’s ballet Romeo and Juliet. This Pristine Audio release offers a new remastering of that recording. It’s not surprising that the Bolshoi played a significant role in the creation of one of the greatest Russian ballet scores. But that role, at least initially, was far from constructive. After Prokofiev’s contract with the Kirov Theater to create a Romeo and Juliet ballet fell through, the composer reached an agreement with the Bolshoi to stage the premiere toward the close of 1935. But according to Prokofiev, “the Bolshoi Theater declared (the ballet) impossible to dance to and the contract was broken.” Prokofiev’s Romeo premiered at the Brno Opera in Czechoslovakia in December of 1938. The first Russian performance finally took place at the Kirov in January of 1940, choreographed by Leonid Lavrovsky, with the legendary ballerina Galina Ulanova as Juliet.

The Bolshoi staged its first performance of Prokofiev’s Romeo and Juliet in December of 1946. Ulanova again was Juliet, a role she reprised on film with the Bolshoi in 1955, with Rozhdestvensky conducting. In 1956, Ulanova and the Bolshoi stunned London audiences with performances of Prokofiev’s Shakespeare ballet. By the time of the 1959 Melodiya studio recording, the musicians had lived with this magnificent score for more than a decade, performing it in the context of fully-staged productions that demanded precise coordination between orchestra pit and stage. I mention this background not only because it relates to the historic value of this recording. I also think the Bolshoi Theater Orchestra and Rozhdestvensky’s familiarity with the score in the context of theatrical performances shines throughout the Melodiya recording. To be sure, Prokofiev’s Romeo and Juliet is a great symphonic score, magnificently orchestrated, with brilliant manipulation of various musical leitmotifs. As such it is a wonderful showcase for a virtuoso conductor and orchestra, as Lorin Maazel and the Cleveland Orchestra demonstrated in their brilliant early 1970s London/Decca recording. But the 1959 Melodiya recording, as much as any of the complete score I’ve heard, radiates the atmosphere of the theater, capturing the narrative sweep of Prokofiev’s music, and Shakespeare’s immortal tale. It’s also clear that Rozhdestvensky and the Bolshoi Theater Orchestra musicians have this score in their blood, and adore Prokofiev’s music.

But while the Melodiya recording is a priceless historic document, it has to date been hampered by poor sound. Despite being recorded in 1959, it is monophonic, with dim, constricted, harsh sonics. A comparison of the Melodiya CD issue with the new Pristine Audio release demonstrates that Andrew Rose has achieved a miracle in sonic restoration. The sound on the Pristine Audio release is warm and with admirable detail. Pristine Audio’s Ambient Stereo process gives the monophonic soundstage a sense of depth and spaciousness that make it fully competitive with recordings of that period. In the past, compromised sonics may well have been sufficient cause to avoid the Melodiya Romeo and Juliet. Andrew Rose and Pristine Audio have removed that barrier, once and for all.