It is sometimes said that Fauré's music is so refined, so understated and marked by such exquisite detail that only the French can appreciate it properly. While his works do betray a French tendency toward classical simplicity and restraint, they also incorporate modern harmony and technique. The result is completely individual and meaningful to audiences of all nationalities. Fauré has long been amongst my very favourite composers, and it was a delight for me to work on this fabulous recording - a winner of the coveted double-star award from The Record Guide.

Fauré's Pelléas et Mélisande was written as incidental music for Maurice Maeterlinck's play of the same name. The play was first performed in Paris in 1893, but was soon translated into English for performances in London. The actress, Mrs Patrick Campbell, turned first to Debussy for incidental music, but upon his refusal turned instead to Fauré, who composed the score quickly in May, 1898. The premiere, at the Prince of Wales Theatre that same year, was a tremendous success. Fauré then selected three interludes for inclusion in an orchestral suite: Prélude, Fileuse and Mort de Mélisande. The haunting Sicilienne was added a few years later, and was taken from his unfinished music for Le bourgeois gentilhomme.

The first movement introduces the tragedy of the play, in which destiny seems to control the unfolding drama more than the character's actions do. The story takes place in the sinister atmosphere of a dank castle. An aging Golaud meets Mélisande, a frail young girl who is weeping deep in the forest. He weds her and introduces her to his younger brother Pelléas (who he thinks will help keep her company). The two youths fall in love and Golaud kills Pelléas in a rage. Mélisande dies quietly. In this context, the two charming middle movements seem a temporary relief from the inevitable tragedy brought to a conclusion with the last.

This new restoration was carried out by Andrew Rose at Pristine Audio from an original Parlophone LP generously provided by Mr. Keith Claxton. 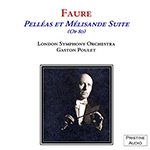