"We go to II barbiere for refreshment. Here the choice of conductor was as happy as it was unexpected. The veteran Serafin and man-of-the-moment Giulini were the obvious choices, but already critics and public were complaining about the predictability of cast-lists in this wonderful new age of complete operatic recordings. Alceo Galliera had attracted attention as a symphonic conductor and an orchestral trainer of exceptional ability. Walter Legge had picked him out for some early recordings with the Philharmonia Orchestra, including a sparkling performance of the Overture from Il barbiere. To the opera itself he brought a light touch, imaginative care for detail and a nice Rossinian feeling of expectancy, of fun brooding in alleyways and lights turned on in corners. It is, of course, an ensemble opera, the whole amounting to much more than the sum of its parts. The famous Rossini crescendo is the embodiment of laughter welling up from all points of the compass. It is as important, for instance, that the "stars" work together in the "Buona sera" quintet as that Figaro should make a success of his "Largo al factotum"; and, however brilliant Rosina's "Una voce poco fu", the general joy of the evening depends more upon the success of the Act I finale. Here, each of the principals makes a special contribution (mostly through an individuality of timbre), but each also draws from the centre (that is, the conductor and, I think, the record producer) a sense of a specialness of occasion, almost of history, that Legge was able to impart to every individual session.

All three principal singers need grace and agility, with the tenor's role widely regarded as of the greatest technical difficulty. The Act 2 aria "Cessa di piu resistere" has until recently been almost always omitted and, on account of this omission and a number of other cuts, it would be impossible to recommend this as the essential version. ButI see no reason to suppose Alva could not have made as good a job of it as his successors have done: he was singing with the most delightful purity of tone and definition of line, and both serenades are sung with elegance. The lingering diminuendi of "Se ii mio nome" is in the best tradition of his famous predecessor Tito Schipa.

Of Callas it was said by Walter Legge that comedy failed to brush her with its wings. He wrote with the authority of experience, but the unprejudiced ear does not support such a conclusion. The two complete sets - Il barbiere di Siviglia and Il Turco in Italia – are sung with a smile which becomes radiantly visible if one can add the memory of sparkling eyes and brilliant teeth as shown in video recordings of concert performances. Of course we listen prepared to flinch before every high note. The accursed flap lurks ahead ready to shake, rattle and roll every dominant-tonic finale, yet almost always we find on returning to such moments that the internal vocal caricaturist has been at work, distorting and exaggerating. The wry humour of "Dunque io son" is much to her liking and in this (as in much else) she is the mistress of humorous timing. Otherwise much is done simply by individuality of timbre, the familiar thrill of recognising the irreplaceable voice.

And the same is true of Gobbi: his voice still had an exceptional richness of colouration, especially in the middle register and at moderate volume. Sometimes the vibrations would flatten out, but the savour was never lost for long; always he was Gobbi and once you had caught a love for the voice it was not something you would drop for a coarsened note or two. Doctors Basilio and Bartolo are also richly cast."

This recording, made in London in February 1957, was the first stereo opera recorded by Maria Callas for EMI. Later that year she would return to Milan to record again in mono at La Scala; unlike their Decca counterparts, EMI were slow to adapt to stereo work, particularly in what might now be considered the obvious field of opera. Nevertheless they did a very good job here - one which I hope you will find has been further enhanced in this Pristine XR remastering. 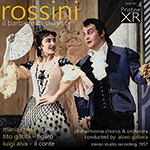