"There is addiction to the heroine...such art is priceless" - Gramophone

"For Callas collectors this will be a very important release, even perhaps a revalation" - Fanfare

Before signing a contract with Walter Legge at EMI, Maria Callas had already committed herself to recording four operas for Cetra in Italy. Of these, only La Gioconda in 1952 and La Traviata in 1953 materialised; it remains unclear as to why the contract was not completed. Even though the Italian recording remained available on import only outside Italy for a number of years, it meant that Legge never commissioned an EMI studio recording of Callas in what was one of her most famous roles. And I'm afraid Cetra's recording facilities weren't up to those of EMI at the time.

Thus this classic recording of Callas (albeit with a somewhat second-rate supporting cast) has long suffered from a rather inadequate sound quality which has a rather boxy, enclosed quality to it, with an unsympathetic acoustic and a tendency to peak distortion on the voices. The combination of re-equalisation, distortion reduction, subtle de-noising and the acoustic space of one of the world's finest opera houses that has made up this new 32-bit XR remastering goes a huge way to alleviate these issues, bringing significant sonic improvements that breathe new life and colour into Maria Callas's wonderful performance. 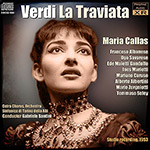 Andrew Rose has done perhaps his finest work yet .. Callas’s voice benefits from this, as do all the other singers and, in particular, the orchestra

This 1953 Cetra studio recording has never sounded this good. Andrew Rose has done perhaps his finest work yet in restoring this to something much more gratifying than the original release (which I have on Cetra LPs, as well as a few different CD incarnations). The sound is less harsh, warmer, and much more open than the close-in, almost claustrophobic original. Callas’s voice benefits from this, as do all the other singers and, in particular, the orchestra.

For Callas collectors this will be a very important release, even perhaps a revelation. For the rest, even serious opera lovers who want in their collection at least one representation of Callas in her greatest role, this is clearly not the one. My recommendation continues to be for the Covent Garden performance with Valletti, Zanasi, and Rescigno, available on a number of labels (I wish Andrew Rose would have a go at that one). This is Callas’s first recorded traviata, and while the voice probably never sounded as secure and solid in any of the later ones, her ability to convey the drama—unusually strong here when compared with other sopranos—continued to grow far beyond what we have here.

And then there is the problem of the artists with whom Cetra surrounded her. Santini’s conducting is often pedestrian (particularly in the Germont-Violetta duet, where many conductors reflect so much more vividly the pathos of the situation but Santini plods along without inflection or real phrasing). Albanese’s Alfredo is decently sung, and gains much from the warmer sound of this transfer; but it is singing without insight or coloring—mere note-spinning. Savarese’s dry, throaty baritone begins to wear on the ears.

The value here is Callas in her best voice. Although she does not reduce “Dite alla giovine” to the mere thread of sound as she was to later in her live performances, it is still magical enough. There is a pure vocal beauty that was not to remain long for Callas, and it is worth hearing this recording for that aspect alone, particularly because it is married to an already intelligent dramatic portrayal, even if it is one that would be surpassed a few years later. A few specifics: “Amami Alfredo” here is full voiced and desperate, with a richness to the sound that was no longer there even in 1958; but the lines leading up to that climactic moment were to gain a sense of urgency, even panic, that is missing here. And the last act outburst at the realization that she was to die so young, while certainly gripping here, lacks the utter horror and anguish of later Lisbon, La Scala, and Covent Garden performances, where the crescendo on “Ah…Morir” is shocking in its explosiveness.

As usual with Pristine, there is no libretto, but there are interesting notes, including comments about the transfer. I must admit that when I received this to review, my first thought was “why did Pristine bother with this recording?” After hearing the difference between the Cetra and this, and hearing just how much better Callas and all aspects of the performance sounded, I understand. It still is primarily of value for Callas fans and serious students of operatic performance as an art form, an art form of which Maria Callas was one of the unique and most important practitioners.