A fabulous taste of Spain from Lola Rodriguez de Aragon

Every so often a recording comes along of which I have no preconceptions or ideas and completely blows me away. Such a fabulous recording is this, though I should admit to a pre-existing weakness for Spanish songs for female voice with piano! If this music is unfamiliar to you I would recommend you get to know it immediately, and in the hands of the great Spanish soprano and teacher Lola Rodriguez de Aragon (1910-1984) there can be few better ways of doing so.

Granados (1867-1916) had set out to found a national school of Spanish music; in his Goyescas, music for piano inspired by Goya, he succeeded in capturing the flavour of the music of Madrid. Likewise the Tonadillas "in ancient style" took their inspiration from Goya, in this case scenes painted for the royal tapestries in Madrid.

The original sleevenotes state: "The word 'Tonadilla' is derived from tonada, a ballade tune of Castille; and the original tonadillas were intermezzos for a few singers which became popular in the theatres of Madrid at the beginning of the nineteenth century."

Each one tells a short story about love, and is given a descriptive title, from The Lover of Goya, addressed to Goya and his painting "The young lover" to The discreet lover in which the girl is indifferent to the ugliness of her lover so long as he shows great discretion to The forgotten lover, in which the girl bewails that her lover has forgotten her, we run through the seemingly endless variety of difficulties and joys of young love.

It should be noted that our source recording does not name the Cor anglais player for the first La Maja dolorosa, and we have been thus far unable to find any further information in this regard. 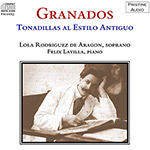