Première of Poulenc's Gloria, an amazing restoration of his Organ Concerto

The review quoted under Additional Information contrasts the present recording with a release by Munch and the BSO, and notes the problems of tuning. Indeed, for those sensitive to these matters the French recording is astonishing for the fact that it was ever passed for release.

This Pristine XR remastering has used the magic of the Grammy Award-winning Capstan pitch correction software to retune the orchestra and organ so that they actually match, unlike the astonishingly out-of-tune original LP! No wonder this otherwise excellent recording has never been reissued - every junction between organ and strings was painful to hear if you'd any sensitivity towards pitch. They must have had cloth ears at the time: straight from the LP the organ comes in at A=444.85 whilst the orchestra plays up at A=452.11. For the curious, the latter is almost a quarter-tone sharp of standard pitch, where A=440Hz. It is indeed now a recording transformed!

There is of course no such problem with the Gloria, which in this 32-bit XR remastering sounds, well, glorious - and fully in tune.

With the space left to me, I decided to add not a contemporary recording, nor even music by Poulenc, but four rare French 78rpm sides the composer recorded in 1937 of piano duets by one of his great mentors, Erik Satie, which I don't believe have seen any commercial issue since their rather obscure 78rpm incarnation. My thanks to Al Schlachtmeyer for his generous donation of these discs.


XR remastering by Andrew Rose at Pristine Audio, January 2012
Cover artwork based on a photograph of Francis Poulenc and the Organ of the Church of Saint-Etienne du Mont, Paris
Total duration: 65:35 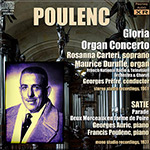 
This strange accident of a simultaneous issue of two recordings of an unfamiliar and hitherto generally unavailable work—for the Poulenc organ concerto is known to the British record public only through an American disc which was obtainable on special order eleven years ago—is a singularly unfortunate one, for they both happen to be extremely good, and each will inevitably affect the other's sales. The concerto, written in 1938 and first performed by Maurice Duruflé, Columbia's soloist, is in one continuous movement, which however falls into four sections. Its essential unity is underlined by a four-note motive which appears throughout in various guises, and those who are usually put off by Poulenc's short-breathed phrases will find that there is here a far greater sense of continuity—it is certainly the best of his concertos. In the opening, and elsewhere, side-long reverences are made to the spirit of Bach (the echo of the G minor Fantasia can scarcely be accidental), and despite the marking of Allegro giocoso for the first main section and a most exuberant finale, there are undertones of serious drama—and the last pages of the work are prayerful (1938 and all that?). Prêtre takes the Allegro giocoso faster and more dramatically than Munch, and this is indeed almost the only real difference in reading between the two. Both soloists, and both orchestras, are excellent, both performances are alert, vital and rhythmic, and both, despite the formidable difficulties of balancing an orchestra against a modern full organ, are brilliantly engineered, giving clarity as well as warmth. The Boston strings make the more ravishing sound at the ires doux et intense section and in the final pages, and the RCA recording is very slightly more forward, but the reason why, after careful comparison, I come down on the side of RCA is nothing to do with the quality either of players or recording. It is simply that the French Radio Orchestra has not tuned exactly enough to the organ, and though the variation in pitch is not noticeable so long as the organ employs upper octave couplings, when it uses eight-foot one alone (as in the dialogues in the Andante moderato, or in solo reed passages) it is apparent that the strings are tuned ,lightly sharper.


The question of couplings is bound to enter into consideration, and here again both firms put up most attractive proposi'ions. RCA has the first decent LP (the one previous version was very poor) of Stravinsky's light-hearted ballet score for Balanchine, in which he cheerfully flirts with 'Fchaikovsky, Johann Strauss, The Barber of Seville and even previous works of his own. The Boston Orchestra, playing with virtuosity and the utmost subtlety of nuance, gives )t a witty, incisive, deliciously pointed performance which is beautifully balanced and recorded. All Stravinskians will want this.


All Poulenc fans, on the other hand, will want this first recording of his Gloria, written for the Koussevitzky Foundation and given 'ts premiere last year in—ironically enough, in the present context—Boston. (The first European performance took place in Paris on February 14th, 1961, and this recording was made the following day.) Like so many of Poulenc's religious works, it finds the composer at his best: behind its joyous, lucid façade lies a deep sincerity, which in the Doming Deus attains real beauty. In this movement Rosanna Carteri floats her octave rises exquisitely and is most touching in her litany of "Qui tollis peccata mundi". The chorus sings with firm tone (though the tenors are unnecessarily aggressive in their "Miserere nobis") and is well balanced with the orchestra and organ (no trouble with pitch this time). As in Jeu de Cartes, there are influences for those who care to discover them: Stravinsky himself (particularly in the jagged opening of the Laudamus te), Ravel, even Verdi (there is an almost exact echo of Otello at the end of the Domine Deus —but it always was a good phrase!) ; but there are so many individual fingerprints that it could never be mistaken for the work of anyone else.

I recommend this disc highly to any Poulenc lover or collector. Ten stars!

Going from Stephen Layton’s superb recording of the Poulenc Gloria on Hyperion 67623 to this historic recording is very disconcerting. The two performances almost sound like two different works. Layton’s performance is marked by bright sonorities, brisk tempos, a lightweight orchestral sound, and the lovely soprano voice of Susan Gritton floating above it all. Georges Prêtre, who conducted this recording with the presence and assistance of the composer, gives an altogether different reading. The orchestral textures are somewhat richer and darker, the tempos a shade slower (in some cases, such as the first and last movements, much slower), making the Layton performance sound somewhat glib and lacking in detail. Mind you, I am still a huge Stephen Layton fan, and I love his performance of the other Poulenc choral works on his CD, as well as several of his other performances, but I must say that this 1961 studio recording is a revelation.


Nowhere is this more apparent than in the “Domine Deus, Agnus Dei” movement, where the astringent wind textures are just so much clearer. In my memory, I had Rosanna Carteri pegged as having one of the more unpleasantly acidic Italian soprano voices of her time, but here her top notes, though very bright, are well placed and not at all forced. In the very opening of the “Qui sedes ad dexteram,” the French Radio Chorus reveals a slightly wobbly baritone or bass voice, whereas Layton’s chorus, Polyphony, is flawless in intonation, but that is the only slight blemish on an otherwise superb and, I repeat, unique interpretation.


Remastering engineer Andrew Rose spends a great deal of space in the booklet notes explaining the mastering errors that occurred in the organ concerto. Among them were sagging pitch in the orchestra, occasional sonic mismatches between orchestral and organ, and what Rose describes as “grinding pitch-change junctions between them.” Not being familiar with the original LP issue, I can’t comment, but Rose quotes a contemporary Gramophone review that complains of these glitches. All I can say is that it’s a marvelous performance, with noted organist-composer-pedagogue Maurice Duruflé, who had premiered this concerto back in 1939, pouring forth great torrents of sound from the Church of Saint-Etienne du Mont instrument. Prêtre, one of the greatest of French conductors of his generation, complements Durufle’s playing with equally rich, dark string tone and passionate phrasing by the French Radio and Television Orchestra. Considering the historic importance of Duruflé as not only one of the greatest organists of the 20th century, but also his connection with this specific concerto, one would have to consider this a must-have performance.


These same two works are also available on an EMI Special Import disc (47723) marketed in the U.S. by ArkivMusic, but reading Dominy Clements’s review of this disc, the pitch problems in the organ concerto seem to still be there, since Clements complains of “a somewhat flamboyant disregard for accurate intonation.”


Pristine’s disc ends with two unusual rarities, composers Georges Auric and Poulenc acting as a duo-piano team in the music of their mentor, Erik Satie. These recordings have, as Rose claims, never been reissued anywhere that either of us can find, but they were uploaded on the Internet, on Neal’s Historical Recordings (nealshistorical.wordpress.com), in 2008. (There are, however, other discs of Poulenc as a solo pianist performing Satie’s music on CBS Masterworks 47684.) The review on Neal’s Historic site claims the performances are a little sloppy. I hear them as merely relaxed, which is what the original Gramophone reviewer thought in 1937 when, apparently, this was the first-ever issued recording of Parade. This is not, however, the only duo-piano recording of music from the ballet. A performance by pianists Jeroen and Sandra van Veen—only five minutes long, however, according to ArkivMusic—also appears on Brilliant Classics 958781. The Auric-Poulenc duo also gives us Satie’s Two Pieces in the Form of a Pear. Rose has managed to remove most of the surface noise and add just enough ambience to the original recording to make it sound decently listenable without overdoing the reverb.


In short, I recommend this disc highly to any Poulenc lover or collector. Ten stars!