This volume is the first in a series which will present the complete recordings of Eugene Ormandy and the Minneapolis Symphony Orchestra (now the Minnesota Orchestra), originally made for the Victor label in 1934 and 1935 and never before reissued in their entirety. It will include many disc premières, including the Kodály, Griffes and Carpenter works featured in the present release.

Born Jenő Blau in Budapest in 1899, Ormandy entered the Royal National Hungarian Academy of Music at the age of five and studied violin there under Jenő Hubay. With plans for a career as a violin soloist, Ormandy came to America in 1921 for a recital tour; but when arrangements fell through, he found himself jobless in New York City. Securing a position in the last seat of the second violins in a cinema accompanying silent films, he rose to concertmaster status in a week, and within three years was appointed conductor.

It was while Ormandy was doing a “side job” leading an ensemble accompanying a dance recital at Carnegie Hall that he was spotted by impresario Arthur Judson, who became his manager. Judson put him to work conducting on the fledgling radio network he had created (shortly to become CBS), and Ormandy thus became familiar to a large audience in the late 1920s for leading light Classics on the air, and even the Dorsey Brothers’ jazz orchestra on disc.

Ormandy’s big break occurred in 1931, when he substituted for an ailing Arturo Toscanini in a guest engagement with the Philadelphia Orchestra. In the audience was an agent for the Minneapolis Symphony, which had been scouting for a replacement for its recently departed music director. Ormandy was quickly signed to a five-year contract.

When it was discovered that the musicians’ contracts did not require additional payment for recording sessions, the Minneapolis Symphony suddenly became the most-recorded orchestra in America. During sessions held in January of 1934 and January of 1935, the orchestra made dozens of recordings, including such large-scale works as the Bruckner Seventh and the Mahler Second. The repertoire ranged from Bach (in transcription) to Schoenberg (Verklärte Nacht) to contemporary American and Hungarian composers, along with a good helping of the light Classics with which Ormandy had been associated.

This volume gives a sample of the range of Ormandy’s repertoire during his Minneapolis years. While his Mozart here is a bit on the brusque and forward side, the unusually fast tempo for the second movement may have been a result of Victor’s desire to feature one movement on each side with no spillover. The Grainger folk-dance settings, along with the similar Sowerby arrangement, are more in Ormandy’s wheelhouse, and it’s a pity he never returned to them later in his Philadelphia recording career.

Following these are recordings of works by two American composers. Charles Tomlinson Griffes was only 35 when he died of influenza in 1920 during the last major world pandemic; yet, he lived long enough to see his works championed by Stokowski in Philadelphia and Monteux in Boston. His Pleasure Dome of Kubla Khan was a disc première, as was John Alden Carpenter’s Adventures in a Perambulator, a look at the world through the eyes of a baby in a carriage.

The recording of Enescu’s Romanian Rhapsody No. 1 was its second outing on disc, although the first (George Georgescu’s 1929 version with the Bucharest Philharmonic) only came out on Czech HMV and had limited distribution, making Ormandy’s supercharged Minneapolis recording the one to first bring it to the attention of a worldwide audience. The KodályHáry János Suite was also a disc première, as was the Weinberger Schwanda Fugue (along with the Polka, an Ormandy specialty throughout his career), which bested Harty’s Columbia recording of the excerpts by two months.

The Rachmaninov Second had previously been recorded by Sokoloff in Cleveland (Pristine PASC 524). Both versions had cuts, as was the accepted practice for many years; but Ormandy’s became the de facto standard for performing editions through the 1960s, until the Urtext became fashionable. By turns exciting and heartfelt, Ormandy’s interpretation (the first of four recordings and a concert video) remains one of the highlights of the Rachmaninov discography.

Special thanks to Nathan Brown and Charles Niss for providing source material
All recordings made in the Cyrus Northrop Memorial Auditorium, University of Minnesota, Minneapolis 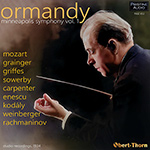