This recording provides us with a truly fascinating opportunity to compare Toscanini in the studio and Toscanini in the concert hall. Two days after this concert was given on a specially-extended NBC radio broadcast. live from Carnegie Hall, the same forces reassembled there with RCA's engineers for the first of three days of recording sessions in order to produce an LP recording of the same work - this can be heard in excellent XR-remastered sound here as Pristine PACO026 ("simply overwhelming" - Fanfare)

I noted in my comments on that release that "in many places the soloists are simply too far back in the mix. Their sound is distant, quiet and at times thin". This is not something which is a problem in this radio concert performance - indeed the whole sound is quite disctinctly different, and an excellent example of just how huge a difference microphone placement can have on the overall balance of the same musical forces.

Whilst the RCA sound has a real 'sheen' to it, the NBC sound is far more direct and forceful, if a little more hissy. But more than this, the two performances themselves differ quite considerably in pacing, most especially in the Kyrie, which at 10'36" is a full minute and a half longer than Toscanini's LP rendition. Likewise he takes a minute longer in the Gloria, and it's only really in the second half of the piece that things start to even out (his Sanctus, at 16'31", is identical in duration in both recordings).

It should be noted, too, that there's another fundamental difference here - though not one of choice by the performers, conductor or broadcasters. The Carnegie Hall organ malfunctioned during the opening Kyrie and was rendered inoperable for the rest of the performance. Naturally, given the nature of the performance, the show had to go on... 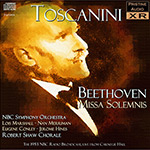 And now, finally, on to the two Pristine releases of Beethoven’s Missa Solemnis, both from 1953 with Toscanini conducting the NBC Symphony Orchestra, and each on a single disc. One of these (Pristine PACO026) is a welcome remastering, in full, rich sound, of Toscanini’s commercial recording made over several days for RCA in Carnegie Hall, though even Andrew Rose could not offset the frustratingly distant acoustical placement of the soloists inherent to the original tapes. The other (Pristine PACO034) is of the Carnegie Hall broadcast that preceded RCA’s commercial recording by two days and which, to my knowledge, has never previously circulated. Just as Toscanini’s recording of Fidelio has always served for me as a touchstone, so too, among commercial recordings, has his RCA account of the Missa Solemnis—even when comparing it to the conductor’s justly famous 1940 NBC Symphony broadcast (available on numerous CD labels), his powerful 1939 BBC Symphony performance (on BBC Legends), and his astonishing, though poor-sounding, 1935 New York Philharmonic broadcast. (The latter, which showed up decades ago on pirate LPs and 10 years ago in a 4-disc Dante-Lys set of Toscanini/New York Philharmonic Beethoven broadcasts, has been listed recently as due again on CD from Archipel.)

Pristine’s issue of the 1953 broadcast performance is unquestionably one of the most important Toscanini releases to have appeared in recent years, not only as a fascinating gloss on the 1953 commercial recording, but also in its own right as one of the most powerful live Missas one might hope to encounter. Aside from the Kyrie and Gloria both being a bit broader than in the commercial recording (the opening of the Kyrie instantly reminded me of the 1935 Philharmonic broadcast), there’s also the fact that, because of the closer miking, the details of the performance (whether accents, phrasings, rubati, or individual orchestral and vocal lines, not to mention overall instrumental and choral textures) are from beginning to end consistently clearer and more audible, making for a remarkably potent listening experience—as from a close-up seat in the orchestra, or a box overlooking the stage, vs. a seat up in the balcony. Then, on going back to the commercial recording, one notices myriad details that were of course present there to begin with, but which, due to the recorded acoustic, failed to speak as clearly. I’d say it matters not at all that the Carnegie Hall organ malfunctioned during the Kyrie and so became unusable for the rest of the performance (Andrew Rose’s notes cite Mortimer Frank’s book, Arturo Toscanini: The NBC Years, on this point); the only real caveat for me to mention is that Lois Marshall’s voice at full cry is not at all flattered by the close miking. Beyond that, the only thing left to say is that it’s time now for those of you enticed by what you’ve read here to head for the Immortal Performances and Pristine Web sites, to place your orders without further delay.