“Five Fifths; and they really do now include one that approaches perfection. Their progress has been quite systematic - each release has been, arguably, in turn “the best ", to be superseded eventually by the next comer. Now Kleiber and the Amsterdam orchestra will take a great deal of superseding; a performance full of fire and tension is matched by a flawless recording.

In fact the onslaught on the first movement will take many people by surprise; but balance, both within the movement, and of the movement within the whole symphony, is assisted by making the initial repeat—a highly desirable one. A more lyrical style can be enjoyed in the slow movement, in which Kleiber nearly makes history by actually observing Beethoven’s più mosso towards the end—whether we think it improves the music or not, it is certainly in the score, and now is equally certainly audible…“ (M.M., Jan 1954)

“Beethoven’s hymn of thanksgiving can certainly be joined in on this occasion; this is a fine record, fully worthy of being put alongside last month’s Fifth from the same conductor and orchestra.

The recording is superlative. It has warmth and virility; if a quibble is to be made, it is that now and again the balance of strings and wind could usefully be adjusted to allow the latter to sing through rather more readily. But the defect, hypothetical in any case, is negligible in relation to the recording's outstanding other qualities.

The performance is straightforward, and immensely effective. Kleiber, in general, is well on the way to becoming the world's Beethoven conductor by what you would think is the simple process of letting his orchestras play just what they see, which is just what Beethoven wrote in the first place. But it is not so simple as it sounds, though the problem is more human than musical; it is that it is difficult to live the life of a star conductor for some years and still believe that Beethoven knew best…” (M.M., Feb 1954)

“…Some crackling ushers in the Decca last side, but settles down with the music in full swing. I can only mention memorable point: the 'cellos and basses make their comments with a single and almost verbal voice; the “tune” sounds exquisite on these Vienna strings; Ludwig Weber strikes the exact attitude on the first vocal entrance, with words and notes (unlike Hotter s in the Karajan) of precise clarity; words all through are good; Hilde Gueden is dramatic and striking, though she uncomfortably snatches her breath here and there; the quartet blends well; Dermota has liquid nasals and a beautifully free delivery; the quiet chorus in “Ihr stürzt nieder” and the following passage is superb; and there is a tremendous driving energy that does not seek exaggerated effects. But for all its excellence, and with the most sympathetic handling. Kleiber's recording does not flood us with warm, embracing, inspiring sound in the way Karajan does on his 78s, And words of special praise should be allotted to the singers of the Musikfreunde — the chorus in both recordings — for their persistence, variety and control.

Casting my mind back over these long listening sessions, I think that if I had no recording of the Ninth in my library, I would buy the Kleiber. If I had the Karajan already, I should be very contented. As a final judgment, Kleiber's is in my view the slightly better performance.” (H.F., Oct 1952)

As these three reviews from The Gramophone indicate, this is Beethoven playing of the highest calibre. All three recordings - and especially that of the Ninth - have been improved greatly in sound quality thanks to these Ambient Stereo XR remasters, giving, body, air, space and breadth to these three timeless masterpieces. 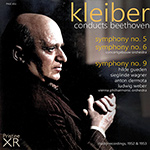