English pianist Clifford Curzon and Spanish (later American) conductor Enrique Jordá recorded two works together for Decca, though in the case of de Falla's Nights in the Gardens of Spain they actually recorded the work twice - a 1945 recording of the piece was remade in 1951 for LP release "for technical reasons" according to The Gramophone (at the time Decca were busy dubbing their ffrr 78s for LP release as much as making new recordings - having heard the 1945 78s it's hard to know what those 'technical reasons' could possibly have been); here we present the later recording. Jordá, judging by the Decca discography, was something of a jobbing conductor for the label at the time, leading a number of different orchestras in recordings between 1945 and 1951 - the de Falla being his final Decca outing. Decca had signed Curzon to the label in 1937 and continued recording for them regularly for 34 years - despite a professed distaste for recordings.

These XR remasters take what were cutting edge recordings of their day, both direct to 78rpm disc (Brahms) and early tape (de Falla) and bring modern technology and techniques to bear on both of them. Both suffered pitch inconsistencies which have been corrected; XR remastering has, in the case of the Brahms, really opened out the somewhat constricted top end whilst, in the Falla, an excessively shrill and exaggerated top end has been tamed and the sound filled out. I also had to deal with the notorious Kingsway Hall rumble on both recordings, which was at times annoyingly obvious. Whilst revealing occasional surface coarseness in the 78s, both are a considerable improvement on previous issues. 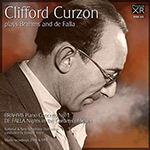 My favorite is Curzon’s recording with van Beinum and the Concertgebouw. It’s one of those “lightning in a bottle” occasions, when three brilliant champions of Brahms perform at the height of their powers, and with boundless, riveting intensity. The early 1950s Decca mono sound provides a more than adequate representation of the historic collaboration. The Szell-LSO recording, in beautiful analog stereo sound, and with a remarkably spacious and poetic (16:00) second-movement Adagio, is also of great merit and interest. But the performance does not possess the fiery, propulsive character of its immediate predecessor or, for that matter, of Szell’s legendary recording with Leon Fleisher and the Cleveland Orchestra (Sony Classical).

Among the three Curzon Brahms First recordings, the 1946 version is the most problematic. London in the immediate aftermath of the Second World War was hardly the most congenial venue to produce a technically pristine recording, or one in optimal sound. Curzon, of course, gives a first-rate account of the solo part. And there are some individual touches that distinguish this recording. For example, Curzon’s initial entrance is his most introspective, poetic, and heartbreaking. But the sound quality of this recording, particularly in past reissues, is far inferior to its successors; harsh, overloading in climaxes, and lacking in definition, particularly for the orchestra, which plays such a major role in this work.

The 1946 recording is part of two Decca multi-disc sets: Clifford Curzon Edition–Complete Recordings (23 CDs and DVD); and Clifford Curzon: Decca Recordings 1937-1971, Decca Original Masters, Vol. 3 (6 CDs). Two single-disc reissues are currently in print. The first, released in 1998, is on the Pearl label (GEM 0041). The other is the 2014 Pristine Audio release that is the subject of this review. I also listened to an mp3 version of the recording as reissued on the Decca Original Masters set. The Pristine Audio is by far the best sonic representation of the 1946 recording. Curzon’s interpretation now emerges with compelling focus and color. The Pristine Audio is also the only reissue of the three to lend some profile to the orchestra. I find the Pristine Audio reissue far better than the Pearl, and enough of an improvement on the Decca to merit separate purchase.

No reservations need be applied to Curzon’s stylish and beguiling 1951 account of Falla’s Nights in the Gardens of Spain, or to Pristine Audio’s remastering of John Culshaw’s spacious and detailed recording. Thanks to Pristine Audio for allowing both of these important documents of a great pianist to shine in their best light.