Although Schubert wrote this sonata for Arpeggione and Piano, it is more usually played by cello and piano, and indeed on the discs from which this recording stems it is referred to as a Sonata for Cello and Piano. The Arpeggione was a curious instrument which didn't catch on. Developed in 1823 by the Viennese guitar luthier Johann Georg Staufer as a kind of upright bowed guitar, it had six strings, tuned as a guitar is, and was a fretted instrument.

Despite Schubert's use of it the following year, 1824, in this composition, written for an enthusiastic arpeggione player, Vincenz Schuster (who also wrote the only method book for the instrument in 1825), the use of the instrument never caught on and after about 10 years it had been largely abandoned. (We've used a photograph of an Arpeggione on our CD cover.)

Thus in the hands of Feuermann, with his subtle use of glissandi, the sonata is very much a piece for cello rather than a fretted arpeggione. His accompanist in this recording, Gerald Moore, noted of Feuermann: "He had perfect intonation, utmost clarity of articulation, beauty of tone quality and mastery of rhythm. All these attributes were the back-bone of his art. From these foundations his imagination ranged freely. His playing - like the man himself - was in perfect taste , though possessed of a fiery temperament, it was held in control and he gave the impression of a most relaxed individual. As a man Feuermann was very well balanced, a delightful companion with thought and kindness for others."

Take a listen to the marvellous third movement in our sample here and you can't help but delight in the playing of Feuermann, and agree with Moore's comments. This is a truly wonderful recording! 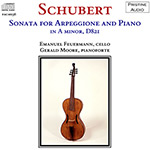