Of his two sonatas for cello and piano, it is the later second in F major (Op.99, written in 1886) which is usually preferred over this first sonata, composed between 1862-65, perhaps for its degree of passion. And yet, in the hands of a great cellist there too is much passion to be wrought from the Sonata in E minor.

There is little doubt about the abilities of Emanuel Feuermann as a cellist, and yet due to his untimely death following a minor operation in 1942, his name is almost forgotten by comparison to the likes of Pablo Casals. Indeed the latter was one of Feuermann's greatest admirers: ""What a great artist Feuermann was! His early death was a great loss to music."

An online biography of the cellist notes: "When Feuermann made his American debut in 1935, the hall was packed with fellow cellists, who had come to hear something truly extraordinary. Following the performance a critic wrote, "Difficulties do not exist for Mr. Feuermann, even difficulties that would give celebrated virtuosi pause."

"In 1938 an English reviewer wrote in The Strad, following a concert, "I do not think there can any longer be doubt that Feuermann is the greatest living cellist, Casals alone excepted...In Feuermann we have a spectacular virtuosic artist of the front rank, the Wieniawski, shall I say, of the cello." Feuermann was famous for his unbelievable facility in the upper registers of the instrument, and was said to be able to easily perform Mendelssohn's violin concerto on his cello exactly as written for the violin."

Note that this wonderful recording, which spanned five sides of very quiet UK Columbia 78s, was coupled with a side of Gluck, entitled Melodie, adapted from his opera "Orphée", again with ven der Pas at the keyboard. We have made this available in our Shorter Pieces section. 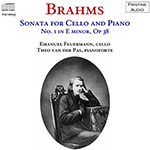