World première of the Ninth - Rare recording of the Second

I first received copies of these two remarkable and rare concerts back in February of this year in cassette form from Edward Johnson. We were both enthusiastic about the performances but just a little sceptical about the medium. I began by transferring the Ninth Symphony and set about its restoration, but soon realised that despite the finest Nakamichi replay equipment and all the digital restoration tools at my disposal, I would be unable to do full justice to the original recording from this particular copy. And so began the hunt for a better source.

A few weeks later, Edward came back to me with the suggestion that the renowned writer, musicologist and expert on British classical music, Lewis Foreman, thought he might have copies of these on tapes stored “in his shed”, and would we like him to dig them out? One likes to hope that, tucked away in attics and sheds around the world are carefully preserved gems like this, as when Mr. Foreman's own tape-to-CD transfer of the 9th arrived I immediately knew we were on track for an excellent-sounding release.

The recording was taken from a later BBC FM rebroadcast, and I've been able to add in announcements from the original broadcast, preserved in a second transfer by Mr. Foreman of discs prepared for overseas broadcasts by the BBC in the 1950s, but of lower overall sound quality. Aside from very occasional bursts of static, which have been largely eradicated, the sound quality was excellent throughout, and it is a pleasure and privilege to be able to make this historic world première recording available to the public.

The Mitropoulos is another stunning and very rare recorded performance, and again Mr. Foreman's source has been used almost throughout (some small patches from Edward Johnson's cassette were required for the opening announcement). However, this originated in another era, and suffered a wide range of faults originating in the acetate 78s onto which it would have been first recorded. I have dealt as best I can with thousands of ticks, pops and scratches, aimed to reduce or eliminate where possible peak distortion, corrected multiple pitch variation problems and kept the sound as open and vital as I possibly can. Sonically, after the 9th; it takes a moment or two for the ears to adjust, but the listener will soon find him or herself drawn into Mitropoulos' magical recreation of Vaughan Williams' London. It really is a superb rendition of this classic English symphony, one which easily transcends the limitations placed upon it by the shortcomings of the original recording.

Special thanks to Lewis Foreman for these transfers from his private collection
XR remastering by Andrew Rose at Pristine Audio, February-June 2010
Cover artwork based on a photograph of Vaughan Williams 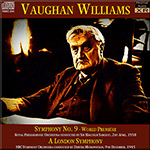 I was wondering when this Vaughan Williams Ninth was going to be issued on CD. I had assumed it would come out on a label like BBC Classics but here it is, finally, on Pristine Audio. I have had the original 10-inch BBC transcription disc in my possession for many years. I even had a friend transfer it to CD. This Pristine Audio reissue sounds fuller and quieter and that is merely one reason I am delighted to see this CD appear. Vaughan Williams, after extensive discussions with the conductor, Sir Malcolm Sargent, supervised the rehearsals and even paid for an extra one to make sure things went right at the 1958 premiere, which this recording preserves. The Ninth is an odd symphony. One might tend to think of it as a sort of farewell to life but there is little of the valedictory about it. The Eighth Symphony sounds like a transitional work to me. The mystical, visionary Ninth, with the composer seemingly staring off into the future, strikes me as a new phase in his creative life, one that might have generated several new symphonies but it was not to be. Sargent’s tempos, it will be noted, are faster, in some cases very much so, than nearly all the conductors who went on to record the symphony (Pristine’s timings are deceptive because they include the pauses between the movements); I think Leonard Slatkin does the Scherzo just a shade faster and Kees Bakels’s total timing is just under Sargent’s (but Bakels wasn’t part of British tradition and was apparently uninfluenced by it). In fact, if I were determined to obtain a modern, two-channel recording, it is to Bakels (Naxos) that I would turn, though I think his last movement falls a bit flat, but this Sargent performance has that elusive sense of occasion and Pristine has preserved and enhanced it. Why, then, didn’t other conductors follow Sargent’s example? I have a theory about that: Sir Adrian Boult, who was closely associated with Vaughan Williams and had already recorded the existing eight symphonies, was informed about the composer’s death shortly before the session during which he was to do the Ninth Symphony for Everest. It goes without saying that Boult would have found the death of one he so admired saddening and I think that, in his mind, the symphony took on a valedictory quality that it really doesn’t have—it is a step into the future, not a summing up. The result was slower tempos and a more solemn approach to the music than that of Sargent, who, in any case, was not closely associated with Vaughan Williams during his career; I am aware of BBC recordings of the Sea Symphony (with a big cut in “The Explorers”) and a very good Fourth, and that’s all, except for this one. It would make sense that subsequent conductors, knowing Boult’s authority (after this, he went on to record the entire cycle all over again), were probably influenced by him. In any case, for me, Sargent’s energetic, swift attack gives the music more sharp edges and I think it is the way the piece should go and, apparently, the way the composer thought it should go. I have one minor complaint and that is the difficulty of hearing the harp glissandos toward the end of the symphony; they really impart an air of mystery, and some conductors do bring those passages off to great effect.

The Dimitri Mitropoulos “London” Symphony is a frustrating case. It just doesn’t sound very good. One company that specializes in historical reissues considered issuing it but finally decided that it just couldn’t be brought up to their standards. In truth, it isn’t up to Pristine Audio’s standards, either, but I’m glad they decided to take their chances and make it available. The 1945 NBC transcription is somewhat muffled, often distorted, on rare occasions even a bit wobbly, but something about this music really engaged Mitropoulos, who delivers a sensitive, by turns poetic and dynamic account of the score. In my A& R fantasies, I have envisioned Mitropoulos recordings of the Sixth, Seventh, Eighth, and Ninth—if I may judge by his studio and live Fourths, they would have been something to hear and, really, so is this Second, if you can listen through the distractions, which do diminish somewhat after the first movement. The conductor’s one unorthodox gesture is the Scherzo, which, though very well done, moves along quite briskly.