Koussevitzky's only commercial recording of the 9th

This transfer is unusual in that it came from a largely unplayed set of clear red vinyl-like 78s issued by RCA Victor under the "Red Seal De Luxe" label in the second half of the 1940s. Although pressed from the same masters as their shellac equivalents, they cost twice as much and were advertised as much for their unbreakability as their much quieter and cleaner surfaces. It was a format which was soon superseded by microgroove LPs and 45s, pressed onto very similar plastic.

In transfer the discs suffered similar shortcomings to both early LPs and many 78s. There was a noticeable treble drop-off towards the end of each side, and many sides suffered from the swish which plagued many discs at all speeds until well into the 1950s. They also presented a considerably raised degree of rumble over other formats. That said, overall (two sides excepted - see editorial, below) the fidelity and clarity of these discs was indeed excellent for their day, and for the overall impression is excellent. It has been suggested to me that these discs could produce the finest transfers possible of this recording - to the extent that a reassessment of Koussevitzky's performance here might be long overdue. I certainly believe this XR remastering has addressed many of the technical criticisms previously levelled against it, and thus allows the recording to be heard in a completely new light. 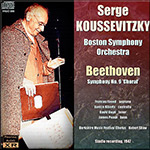 The orchestral sound is remarkable in its wide dynamic range and accuracy of timbre ... this sounds like an especially fine LP from the early ’50s

This performance was recorded in three sessions held during August 1947 in the Tanglewood Music Shed. It is not easily characterized in that, more than anything else, it projects a prevailing neutrality lacking the intensity suggested by Weingartner (1935), the thrust and lyric delicacy of Walter (1949), and control and dramatic tension projected by Toscanini (1952). Yet as a historical document it is fascinating. For one thing, having 78-rpm discs as its source, the orchestral sound is remarkable in its wide dynamic range and accuracy of timbre. This in part is the result of Pristine’s having had access to a clean set of 78s pressed on vinyl, one of several “deluxe” sets that RCA issued in the late ’40s. With its seamless side joins, this sounds like an especially fine LP from the early ’50s, at least through the first three movements, the finale lacking some of the impact and color of what preceded. Although there is much about Furtwängler’s extremes of tempo (Bayreuth, 1951) that I find excessive, at least they suggest a point of view projected with conviction. By contrast, Koussevitsky seems to have no conviction, going through most of the music with mere correctness and emotional tightness. Never, for example, have I encountered the timpani thwacks of the second movement executed with such inappropriate gentleness. Nor is the coda of the first movement as spooky and terrifying as it should be. And if the very close of the finale is free of the hysteria that Furtwängler generated, it also is without the sense of finality that Toscanini conveyed by favoring what was the slowest pace ever accorded the passage in a major recording. The four soloists do well, but they are not the issue here. Only the first of two repeats is observed in the second movement. Certainly, as a document of Koussevitsky and of the fine efforts of RCA’s and Pristine’s engineering, this release is valuable. But it falls short of getting to the core of the music.