Bruno Walter's 1951 Brahms Cycle with the NY Philharmonic - and more!

"These concerts apparently find Mr. Walter at the very zenith of his powers, absorbed in a task which is especially dear to him" - NY Times 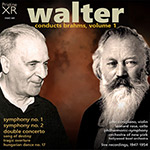 Bruno Walter began his Brahms cycle with the Philharmonic-Symphony last night in Carnegie Hall, and gave us a wonderful concert. He played Brahms without the slightest affectation or mannerism, with all his heart, and a simplicity and nobility of spirit which matched the music.
It was a great pleasure to hear the scores played without any attempt to modify or beautify them. The rugged and melodic Brahms, whose orchestration is quite often stringy and unsilky or glistening, fell upon our ears, “echt” Deutch and “echt” Brahms. Perhaps this is too provincial a way to put it. The universality of the music rather frowns upon that.
On the other hand, the very grandeur and universality of this immortal music comes from its soil and from the consciousness of an artist who was profoundly German in his consciousness and his devotion to the traditions of the German symphonic art.
Mr. Walter, in arranging and finding the almost ideal tempi and inflection for this music, pointed out something else to us, which is that Brahms, popularly conceived as the neo-classic master of his period—and ours too, for that matter—is not only a romantic composer, but, in the appropriate circumstances, is to be interpreted as such.
Contrast in Interpretation
This refers especially to the reading of the C minor symphony, which ended the program, and the contrast between its interpretation and that of the “Tragic” overture which opened it. In the “Tragic” overture Brahms is completely a classicist. There is mysteriously communicated, in this music, the tragedy of human existence, and the grandeur of destiny. The style is singularly austere, impersonal, like destiny. There is no self-pity, no caterwauling at fate. Wherefore, Brahms is here a classicist not only in form and workmanship,
The form of the great C minor symphony is also classic. The symphonic methods are those of the classical masters of composition in whose footsteps Brahms was both proud of and also diffident about treading. But actually, in this work, he is a wild-eyed romanticist—as was Beethoven in a certain other C minor symphony. And Mr. Walter read the music in the flaming romantic spirit—“sturm und drang”—with all sorts of grand rhetoric. He did not hesitate for an instant to retard or accelerate, or entirely differentiate the contrasting phrases of the introduction, in the instance of the lyric phrases which immediately follow the initial motive, heard over the pounding drums.
Later on, the way in which he maintained the pace of the choral melody which opens the finale, after the prelude with a horn-call, was a master-stroke of classic architecture. And this finale was tonal drama of the most thrilling kind; We need not particularize farther. The transcending value of this concert was the conviction, the rugged strength and unfeverish, unmodern, absolutely real faith and emotion which vibrated in every measure.