The final two sonatas in Schnabel's Beethoven cycle were both recorded at his first Abbey Road session in January 1932. As Schnabel later wrote, he was not overly pleased with the initial results of his efforts in a recording studio: "I felt as though I were being harried to death. Everything was artificial - the light, the air and the sound, and it took a very long time before I could make the gramophone people adjust some of their equipment to music, even longer to adjust myself to the improved equipment."

Getting the best out of the two sonata recordings has not been easy - despite running to just 45 minutes, my working files for the sonatas alone generated some 11¾ hours of music and an entire abandoned near-finished set. They were more coarsely and noisily recorded than later sonatas in the series and in order to get the best from them I've had to leave a higher level of background noise than in most of the others - my attempts to reduce noise further resulted in intolerable losses of musicality and unevenness of sound.

The tonal quality of the piano in the 1938-recorded Eroica Variations is generally much improved over the earlier recordings, and generally sides were much quieter. However, the presence of swish through many of the sides created a great deal of restoration work and has left some higher residual noise in places than I would have liked. Overall, however, I believe the sound quality here is far more closely representative of the finer nuances of Schnabel's piano tone than is possible to attain from the 1932 sonatas. 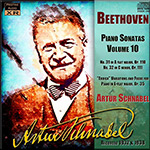 A marvellously successful performance, with vivid detail wedded to a conception of invincible grandeur

Artur Schnabel’s cycle of the 32 Beethoven sonatas has long been available on CD. Although the fine transfers made by Mark Obert-Thorn for Naxos cannot be sold in the U.S. (and may now be out of print), two others can be had, both in eight-disc sets: one from EMI selling for about $95 and one issued in 2010 from Musical Concepts (which I have not heard) available from ArkivMusic for a mere $31.49. In two key areas, these Pristine releases differ from those sets—they are the first two of what will probably total eight discs, each to be available individually. Moreover they embody what may well prove to be the sonically finest transfer that these recordings from the 1930s have received. Pristine offers transfers boasting many passages that feature greater presence and quieter background than what EMI and Naxos achieved. To be sure, Pristine’s sound is variable. Its best occurs in the Sonata No. 4 that opens the second disc. Indeed, the sound there is so fine, one might be tricked into thinking the source was a quiet LP from the late 1940s. Other sonatas are not always so sonically impressive. Nonetheless, Andrew Rose’s engineering never requires any modification with the flexible 10-band equalizer that I have often used in reissues of this kind. Side joins are seamless, presence often astonishing, and dynamic range surprisingly wide. And of equal importance, when these transfers of the 32 sonatas are complete, collectors who do not wish to acquire all of them will be able to purchase those they find most appealing. A final word: Hearing these releases has reminded me of how Schnabel was not always technically perfect. But of far greater significance, his performances underscore why he was absolutely the right choice as the pioneering first pianist to record all of Beethoven’s 32 piano masterpieces.

"The player's fine mind shows best in the last half of [Opus] 110. He beautifies the sometimes rather awkward piano writing. This is a rich combination of expository skill and imaginative interpretation. The only player who I think makes the fugue (it is a rondo-fugue, worth pondering) even more deeply serene is Hess. There is just a shade of rhythmic unevenness in Schnabel; but the movement's inward grandeur shines out." [1933]

"...nor do I know of musically more satisfying accounts of the Sonatas Opp. 110 and 111 —which is not to forget fine, and better-recorded accounts, by Kempff, Myra Hess or Arrau ... This cycle, I need hardly reiterate, is one of the glories of the gramophone. Indeed, I can think of few undertakings of comparable scope which offer such self-evident proof of the importance of the medium. If you missed the original reissue in 1964, don't hesitate now. The cycle has its oddities and eccentricities, but for once it is no exaggeration to say that to neglect Schnabel is to neglect Beethoven." [1981]

"[The only dull piece in the volume is the Minuet in E flat,] but after it is over ample amends are made by the splendid Variations in the same key subtitled here "Eroica," because the theme, on an air from the ballet Prometheus, is used for the finale of the third symphony... At last Schnabel gets really good recording. In this album I find the fullness of tone that has always been lacking before and not a harsh or thin sound. As in the fourteenth album the pianist is at the top of his form and shows us convincingly what piano literature owes to Beethoven. There are one or two places in the alla fuga finale of the variations where semiquavers are rushed but there is no room for criticism elsewhere." [1939]

"...taken as a whole this is a marvellously successful performance, with vivid detail wedded to a conception of invincible grandeur. The pillars of the design are made clearer and firmer than I've ever heard them before: that's to say, the introductory arch (before the theme is reached) ; the span of variations 1-14; the widening vista of the fifteenth variation (the largo) and the bridge to the final fugue and coda." [1965]

WRA, RO, AR, SP. From reviews of original issues and reissues, The Gramophone