Artur Schnabel's 1930s Beethoven Sonata recordings are not a remastering project to be undertaken lightly. There are of course many other transfers already available, and I have held off beginning this series for a number of years, until I could be confident not just of repeating the previous efforts of my colleagues, but of achieving something dramatically new and substantial to the recordings through Pristine's 32-bit XR remastering process.

This is a project which has been started and abandoned several times before in my efforts to produce the very finest, most authentic piano tone, with as clean and quiet a background as possible. This I believe I have finally achieved here, and it is only in the occasional side or short section that one is reminded that these recordings were made nearly 80 years ago. My hope is that the much increased clarity, fidelity and realism of these Pristine releases will allow the listener a far greater appreciation of Schnabel's genius than ever before - and that you will forget the vintage of the recording and matters of sound quality and enjoy these legendary recordings as if hearing them for the very first time. 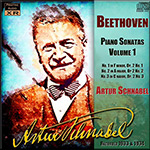 When Fred Gaisberg of HMV finally came to an agreement with the pianist Artur Schnabel in 1932 to begin what was to become a legendary series of recordings - the first complete cycle of Beethoven's piano sonatas on disc - Schnabel had been resisting and refusing all offers from gramophone companies for a good number of years. When asked whether he felt the gramophone machine wasn't good enough for him he replied "It is I who am not good enough for the machine". His meaning was simple - that no single performance could or should be good enough to exist as a single record for all eternity, however good it was; no two of his performances were ever exactly alike, and in Schnabel's view no one performance could ever capture the multiple possibilities and facets of these compositions.

Perhaps it was a combination of the need for financial security during the depressed and politically turbulent 1930s (as an Austrian Jew), coupled with the thrill of playing the complete 32 sonatas in London, and the promise of recording the full series of Beethoven sonatas and concertos rather than just a few favourites which finally sealed the deal. Certainly Schnabel didn't enjoy the work much - he referred to the Abbey Road studios as his "torture chamber" and the recording process he once called the most painful experience of his life, though you'd never guess this by listening to the results he achieved.

Schnabel's aversion to and philosophical difficulties with the recording process certainly wasn't helped by the rise to power in 1933 of Hitler in Germany and Schnabel's swift exit from a country he had regarded as home for most of his life, and where he was never to play another note during his lifetime. Thereafter he effectively lived in London and New York, though his performing and teaching work took him on many travels; recording sessions for the Beethoven sonatas were slotted in between other engagements on both sides of the Atlantic between 1932 and 1935.


Nearly eighty years later, Schnabel's Beethoven sonatas are still held by many as perhaps the supreme interpretations, a benchmark against which all newcomers are still compared. As such it's no great surprise that they are still in the EMI catalogue (though the reviewers of Amazon.com seem to give EMI's current CD remastering a firm thumbs down), nor that there are any number of alternative reissues and remasterings past and present to choose from on a wide variety of labels. A quick search on Amazon reveals some 79 results - an assortment of single discs, box sets, compilations and the like - and so we really must as the obvious question: is there any real need to produce yet another issue?

Schnabel's Beethoven is a project I've been toying with for quite a while now. It took me quite a long time before I felt I was getting truly worthwhile results with XR remasters of piano music of this era. This is, amongst other things, down to the very exact precision of pitching required for the process to work on this kind of material. Put simply, if my source material and my reference recording aren't perfectly matched in pitch the re-equalisation of the source recording just doesn't work. The life is sucked out of the piano tone and the instrument ends up sounding hollow or dead. This has always been less of a problem with an orchestral recording, where pitch, although nominally equal throughout the instruments, is actually something of a fuzzy blur when you come to measure it - pick any orchestral chord and check the frequencies being played and some will be fractionally sharper or flatter than others; it's what helps round the sound out, and is of course also helped by the use of vibrato.

By contrast there's no vibrato on the piano, and only one person playing a sonata on one piano. Assuming the piano is properly in tune there's little pitch variation up or down the keyboard, hence the need for very precise readings to be taken in order to match up the pitches of the two recordings required to make an XR remastering. (In this case I'm using Ashkenazy's sonata recordings for reference purposes in order to re-equalise Schnabel's piano tone.)

An excellent tool came my way a few months ago which has greatly simplified and made more accurate my measuring of frequencies, right down to an accuracy of a thousandth of a Hertz. I like to pick a single note from a piece and "tune" both recordings (using a standard pitch where A=440Hz) using that note alone, picking a single harmonic from the range of frequencies which make up each note that's been played. Thus if, for example, the root frequency of a G above middle C in Schnabel comes out at 394.634, I can repitch him to 392.000 Hz by lengthening the entire recording by 100.672 per cent, thus dropping the pitch very slightly. If Ashkenazy comes out at 391.323Hz on the same G in the same bar of the same sonata, I'll reduce the length to 99.827% of its original duration, thus lifting the pitch slightly, getting both recordings perfectly in tune with one another, as well as properly in tune alone.

This little technical diversion may seem a bit esoteric for an article such as this (and the figures used here are hypothetical), but I want to convey one of the multiple difficulties which arise when I remaster piano recordings, and thus one of the reasons why I've kept putting off tackling such a series as this. Put simply, when you've committed to a Beethoven sonata cycle, there's no going back, and there's no second go. I had to be confident in my own ability to do real justice to the recordings, and a handful of discarded tests over the last 2-3 years are testament to the difficulty in getting it right with material of this vintage.

This time round it was different. I've stated before that I often have little real idea as to how a recording is going to sound after a full XR remastering. The process of re-equalising a recording using another reference can change so much in the sound quality of that source recording that I really can't second guess what might be possible and what simply is not going to work.

So when I received yet another e-mail a few weeks ago asking once more for the Schnabel sonatas I thought I'd have nothing to lose if I just had one more quick try at one of them - the first, being a short one, was an obvious place to start!

This time the magic was most definitely working. With good transfers to begin with - an absolute essential when resurrecting something like this - I was able suddenly to hear a quite remarkable transformation from a rather flat, clanky and dim original into something which sounded astonishingly alive and real.

This sonic transformation has a wonderful side-effect for the listener which even I haven't truly appreciated until now, and is one of the reasons why I chose a slow movement for the sample from this first volume: with the sound of the piano made hugely more realistic the sense of Schnabel's performance and touch seems to me to be magnified and clarified a hundredfold. Nuances which for decades have fallen victim to the quality of recorded sound and thus rendered inaudible are suddenly revealed; delicacies which the flatness of tone had obliterated can now be heard and appreciated as perhaps never before.

I've found myself doing what I try never to do - sitting back and listening over and over again to the music and the performance, rather than trying to filter this out so I can hear the flaws, clunks, clicks and bumps I need to fix. Even now I'm being distracted from writing this because the sound of Schnabel is drawing me into Beethoven's first sonata and I keep sitting back in amazement just to hear it - yet again!

It's not entirely perfect, I'll admit. Occasionally a rough patch of mild peak distortion or a slightly poorer section of disc surface reminds you that you're listening to a piano recorded in 1934 rather than decades later, but for the most part I forget this in a way I simply cannot when listening to the original, or to the other transfers I've heard.

This is the start of what promises to be a lengthy journey. My aim is to produce a volume each week and build the series over the summer, a CD's worth at a time, in order of composition numbering. I'll have to keep my fingers firmly crossed that the quality of the first volume can be sustained throughout.

Yet even if the sound quality does slip at any point (I hope it won't, but quite simply won't know until I've finished) I can think of few prospects less tempting than spending the coming weeks and months working my way through Artur Schnabel's complete Beethoven sonata recordings. Could you?

Artur Schnabel’s cycle of the 32 Beethoven sonatas has long been available on CD. Although the fine transfers made by Mark Obert-Thorn for Naxos cannot be sold in the U.S. (and may now be out of print), two others can be had, both in eight-disc sets: one from EMI selling for about $95 and one issued in 2010 from Musical Concepts (which I have not heard) available from ArkivMusic for a mere $31.49. In two key areas, these Pristine releases differ from those sets—they are the first two of what will probably total eight discs, each to be available individually. Moreover they embody what may well prove to be the sonically finest transfer that these recordings from the 1930s have received. Pristine offers transfers boasting many passages that feature greater presence and quieter background than what EMI and Naxos achieved. To be sure, Pristine’s sound is variable. Its best occurs in the Sonata No. 4 that opens the second disc. Indeed, the sound there is so fine, one might be tricked into thinking the source was a quiet LP from the late 1940s. Other sonatas are not always so sonically impressive. Nonetheless, Andrew Rose’s engineering never requires any modification with the flexible 10-band equalizer that I have often used in reissues of this kind. Side joins are seamless, presence often astonishing, and dynamic range surprisingly wide. And of equal importance, when these transfers of the 32 sonatas are complete, collectors who do not wish to acquire all of them will be able to purchase those they find most appealing. A final word: Hearing these releases has reminded me of how Schnabel was not always technically perfect. But of far greater significance, his performances underscore why he was absolutely the right choice as the pioneering first pianist to record all of Beethoven’s 32 piano masterpieces.