Recorded in stereo in London and Hollywood, 1960
Total duration: 79:52

First release outside US for their Walton Belshazzar, Vaughan Williams Mass, and Bach Cantata 4

These transfers came from the generous collection of Edward Johnson, to whom I am once more grateful. The discs were both issued in the USA in 1961 but we do not believe elsewhere, nor have they been reissued before. XR remastering has done much to clarify diction and relieve a somewhat "plummy" tonal quality, and I've attempted to ameliorate the rather unpleasant and obvious reverberation used on Belshazzar's Feast with careful use of a modern convlution reverb. The average pitch of the recordings was around A=443Hz - given that altering this to 440Hz would have lengthened the overall duration to beyond that of a CD I elected to keep it. I've also dealt with quite a lot of pre- and post-echo, particularly in the Walton recording.

Front cover artwork based on a photograph of Roger Wagner
XR remastering by Andrew Rose at Pristine Audio, March 2012
Recorded in stereo in London and Hollywood, 1960 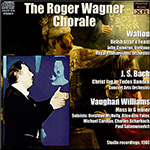 These are all stereo recordings sourced from the collection of Edward Johnson. Pristine are pretty sure that these recordings, taken down from American LPs, have not been reissued before. They have been treated, so we are assured, to a great deal of technical tender love and care. The results sound good - probably as good as they have ever sounded.

This is a really good Belshazzar's Feast and it took me quite by surprise. This 50+ year old recording opens the door on a reputation that has slipped silently into the mist. This Wagner deserves better. I wonder what else he recorded. All Waltonians should get this and compare it with the other greats: Previn's for EMI and my other outsider - also American - Ormandy on Sony. The oak-sturdy ‘bassy’ baritone is John Cameron: his projection is all lofty oratory, condemnation and exultation. The choir has been drilled to precision and combines the power of a massive engine with the precision of a scalpel. If Wagner has injected the faintest trace element of Hollywood glow it certainly suits the music. The instrumental detail is magnificently well rendered in stereo. One small detail: this recording sports the work's best anvil sound ever. It rings true and loud.

While the Bach is old-fashioned big-band stuff you might enjoy its caramelised and super-smooth remission from HIP rigour. Certainly it swims against the torrent of the times. True-blue adherents of authenticity might like to try it when they need something to rail against. The RVW Mass is right at the opposite pole to the EMI Classics one of yore. This is more broodingly passionate Rachmaninov Vespers than Byrd. I liked it, having found myself only fleetingly engaged by the Willcocks EMI version. Whether this is authentic RVW I doubt. It may even enrage some but in it we hear the composer as urgent pilgrim. It’s more a matter of ardour than ascetic devotion and as such is more in touch with the RVW presented in the television documentary: The Passions of Vaughan Williams.

Some intriguing material here and a totally enjoyable Belshazzar that should shake some dust out of the rafters.