release brings together two world première recordings of concertante works made by Sir Thomas Beecham in the 1930s. The studio recording of Don Quixote has an interesting pedigree. Recorded by Victor at the behest of EMI in 1932 and issued on that label in the USA, it was released on Columbia in Europe, perhaps the only recording to appear simultaneously on these two rival imprints. This was most likely a result of the then-recent merger of English Columbia and HMV, Victor’s British affiliate, into EMI. Beecham was a Columbia artist, so the apparent reasoning was that he had to continue to appear on that label in the UK. Within a few years, however, his name was on both labels interchangeably.

Beecham is heard here conducting the Philharmonic-Symphony Orchestra of New York, an ensemble with which he had first appeared four years earlier along with another debutant, Vladimir Horowitz, in a notorious performance of the Tchaikovsky B-flat minor concerto which saw the two taking divergent interpretive paths. Apparently, he had no similar difficulties working with the orchestra’s first desk players, which included future conductor Alfred Wallenstein handling the pivotal cello part. The recording is rather curiously balanced, with the brass and winds seeming to overpower the strings, and Wallenstein sounding rather recessed – probably playing in his usual place in the orchestra rather than up front. This recording was simultaneously made for Victor’s Program Transcription series, an early attempt at long-playing records. Each 33 1/3 rpm side was the equivalent of two 78 rpm sides, which accounts for the skipped number every third matrix.

While Beecham would go on to re-record the Strauss with his own Royal Philharmonic and Paul Tortelier as soloist fifteen years later, he never re-recorded (or indeed made an official studio recording) of the Bloch Violin Concerto, even though he had already made three classic concerto recordings with the soloist, Joseph Szigeti. Szigeti premièred the Bloch in Cleveland under Mitropoulos in December, 1938. The present recording of the first British performance with Beecham dates from the following March. Later that month, he performed and recorded it in Paris with Munch, and followed up with a further broadcast under Mengelberg in Amsterdam that November.

While the Munch recording and Mengelberg broadcast have been reissued several times on CD, the Beecham performance has curiously been unavailable since a single American Beecham Society LP release in 1973. That transfer, which was the basis for what Andrew Rose used for his present XR restoration, filled in four gaps in the original acetates (two in the first movement, and one each in the others), each lasting about 30 seconds, with the Munch studio recording. A slight difference in sound demarcates each patch. Although some disc noise and distortion remain and the first note of the third movement is clipped, the recording is valuable not only in preserving a historic collaboration, but also in presenting an infrequent recorded instance of Sir Thomas conducting contemporary music. 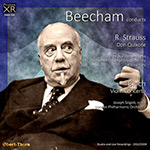 A new transfer of Beecham’s 1932 recording which, apparently, was the very first recording of the work...

Sir Thomas Beecham made a celebrated studio recording of Don Quixote in 1947/8 for HMV when his cellist was Paul Tortelier. I believe that the latest incarnation of that recording is as part of a substantial Beecham box that David Bennett reviewed in 2011. When I was offered the chance to review a new transfer by Pristine Audio of a Beecham performance of the work I assumed I would be getting a copy of that recording; that would have given me the chance to compare the Pristine transfer with the EMI transfer that I already own, which is in the Great Recordings of the Century series. I mean no disrespect whatsoever to Paul Tortelier when I say that what arrived through my letterbox was something even more interesting. For what Pristine offer here is a new transfer of Beecham’s 1932 recording which, apparently, was the very first recording of the work.

At the time he made the 1947 recording Paul Tortelier was just emerging from an orchestral career and was seeking to establish himself as a solo cellist – the booklet note in my copy of the EMI CD, written by the late Lyndon Jenkins, relates the amusing and typically Beechamesque cavalier fashion in which he came to be engaged to play the work for Beecham’s 1947 Strauss festival in London. However, even though Tortelier was not, in 1947, an established international soloist it seems clear that Beecham engaged him as a concerto-like soloist rather than using principals from the orchestra, as Strauss intended. In 1932 matters were arranged rather differently: this recording followed the composer’s preference for the use of orchestral principals. So Beecham had the services of Alfred Wallenstein (1898-1983) who later became a conductor but who was at that time – since 1929 – the principal cellist of the Philharmonic Symphony Orchestra of New York. Joining Wallenstein on the soloists’ roster were Michel (Mishel) Piastro (1891-1970), the orchestra’s concertmaster from 1931 to 1943, and René Pollain who was, I believe, the principal violist at this time.

In this recording you won’t hear Wallenstein balanced as an up-front soloist and Mark Obert-Thorn, who has made the transfer, suggests that he may have been seated in his customary place in the orchestra. That seems entirely plausible but nonetheless you can hear Wallenstein perfectly clearly and a fine soloist he makes. Beecham’s contribution is a distinguished one too and he – and the recording engineers of the time – make sure that plenty of detail is audible in the often-complex textures of the Introduction. Beecham seems to me to characterise the music well, often with a twinkle in his eye. For instance, the sheep graze placidly in Variation II until Quixote panics them and they scatter in confusion. The recording can’t really do justice to ‘The Ride through the Air’ – one longs for the amplitude of modern sound – but it’s still possible to hear the washes of sound that Beecham gets from the orchestra, the trumpets and horns well to the fore.

As well as a very good Don Quixote the performance benefits from an equally good Sancho Panza and both Wallenstein and Pollain are heard to good effect in Variation III, ‘Dialogue of Knight and Squire’. Wallenstein plays eloquently in Variation V, ‘The Knight’s Vigil’ and towards the end, as the Don is dying I feel that Wallenstein conveys the world-weariness of the Don and the pathos of the scene pretty well. Hereabouts there’s a nice simplicity of utterance to his playing and he and Beecham bring off the ending very successfully.

Mark Obert-Thorn has made a very good job of the transfers. The original recording was made on experimental 33 1/3 rpm discs, each side of which was the equivalent of two 78 rpm sides, and these have been the source material used. I’m very glad to have heard this historic performance.

I wish I could be as enthusiastic about the Bloch Violin Concerto but I’m afraid that I’ve listened to this a couple of times and it really doesn’t engage my sympathies. That’s not the fault of the performers. Szigeti is superb and, since he’s well to the fore in the recording it’s possible to appreciate his virtuosity in a demanding solo role. Even more admirable is the singing purity of his tone. A prime example of that comes in an extended slow, reflective passage in the first movement (5:52-8:50). Szigeti’s poetic side is also strongly in evidence in the rather haunting slow movement. I liked this movement the best – perhaps in part because it’s the shortest movement. The first movement, however, at 18:10, is nearly three times as long and I think it’s too extended for its own good. In particular the cadenza (12:48-15:25) just seems to go on and on – and to no great purpose. The opening tutti in the finale sounds brash – how much, I wonder, is that down to the recording rather than the music; the recording can’t really cope with the volume of this passage and, indeed, sonically this is the most problematic movement in the concerto. Here, as elsewhere, all the performers demonstrate commitment to the music.

Unfortunately, despite the best efforts of Andrew Rose there are issues with the sound in this concerto. There’s a good deal of surface noise; in loud passages the orchestra can sound strident; and the sound often crumbles in loud passages. Naturally, one must make allowances given the provenance of the recording, which was captured – off air? – from a live performance in 1939, which was the UK première of the work. Later that same month Szigeti made a studio recording with Charles Munch. We learn from the notes that the present recording was found to have four gaps in it, each of about 30 seconds. Prior to the only previous release of the recording, on a 1973 LP from the American Beecham Society, these gaps were filled by splicing in the relevant passages from the Munch recording. That editing was done pretty seamlessly, it seems. Andrew Rose has used the 1973 release for his transfer.

Summing up, this release from Pristine will be of considerable interest to Beecham’s many admirers. The Bloch is not a piece with which one would have associated him – did he ever return to it, I wonder? So this is an important addition to his CD/download discography, especially for listeners who warm to the work more than I do. The Strauss is especially significant, I suggest, not least because this was the work’s first recording and it’s a very good one. I’m very glad to have it sitting on my shelves next to Beecham’s 1947 recording.