Devotees of ''full-blooded’’ Italian operatic singing—which is only too often a polite synonym for old-fashioned bawling—will not find this the Aïda of their dreams; but they are already fairly well catered for in the existing H.M.V. version. This performance is on a higher artistic plane altogether, the goal being not mere brilliance and vocal display but dramatico-musical effect and convincing characterisation. (That Aïda, being a "festival" opera, is always mounted with an eye to the spectacular is not an irreconcilable fact. One can enjoy the massive crowd-effects, the elephants and the rest of the trappings without necessarily discarding musical finesse.) The tone for the whole production is set by Renata Tebaldi, who gives a more musicianly reading of the name-part than I remember ever hearing before: this accomplished artist, who has already given us memorable recordings as Mimi, Tosca and Butterfly, now tackles with conspicuous success a part which combines both the lyric and dramatic types of soprano voice—though her natural inclination seems to be towards the former. For example, her Ritorna vincitor (which I like better than the isolated recording she made two years or so of this aria) is, for all its sensitivity to changing moods, less outstanding than her Nile Scene solo, which is touchingly beautiful. And, as in La Bohème, her Death Scene almost reduces me to tears. Her sympathetic feeling throughout the work for line contrasts strongly with Caniglia’s declamatory barking in the H.M.V. set.

The part of Amneris is taken by that great artist Stignani, whose voice sounds as fresh and youthful as it ever did. It is in the highest degree instructive to compare her superb performance here with her reading of the same part in the H.M.V. recording, in which she pushed her tone unmercifully: here she carries complete conviction as the proud princess torn asunder by conflicting emotions. One of the highlights of this performance is her great jealousy-duet with Aïda in Act 2, which is broken in upon by the sound of trumpets in the far distance…

When we turn to the consideration of the acoustic standard of this recording, we come up against the age-old problem of opera-house atmosphere and stage illusion. This performance has obviously taken place in a theatre (an empty one), and the engineers have been at some pains to reproduce the aural perspective of this opera. There is, for example, excellent atmosphere in the Judgment Scene and the final duet in the vault, with Amneris and the priests above the lovers' living tomb; and the effect of the stage trumpets in the triumphal procession (apparently from different parts of the stage) is brilliant—act 2 ends in a real blaze of glory. But use of an opera-house is responsible for two defects : the orchestra (whose playing is admirable) sounds as if it is, in fact, in the orchestra-pit, being picked up only by the stage microphones, and hence is very woolly and “backward” in quality ; and the full chorus, seemingly stretching back for some way on a vast stage, produces a cavernous sound which is badly lacking in definition. Even the smaller chorus of Amneris’s attendants at the start of act 2 (one of the weaker moments of the score) is fuzzy.

The great artistic merits of this performance, however, should outweigh these shortcomings—which, as always, are so much more evident in a recording (where there are no visual distractions to mitigate them) than in the theatre, where far greater defects can pass almost without comment.

It is interesting to read the criticism here of the orchestral sound in this recording. After the tonal rebalancing aspect of XR remastering any sense that the orchestra is in any sense “woolly and backward in quality”, or indeed poorly recorded at all, has entirely vanished. If we compare it directly with the 1955 Callas Aïda I remastered not so long ago (PACO178) one hears very similar sound quality in the orchestral and balance - which is very good for its age. However, in the original recording of 1952, prior to this remastering, even in Decca's most recent reissue, the tonal balance is pretty grim and unpleasant. It’s something the Decca engineers would soon begin to iron out - by the time Decca returned to Rome in 1954 to record again with Tebaldi and Del Monaco they had taken huge steps forward in sound quality. But it has taken XR remastering to finally bring out the true – and wonderful - sound quality locked into this recording, unheard for some 70 years. 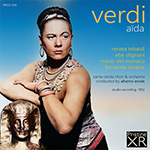