Tosca offers much more difficult problems than La Bohème or Madame Butterfly to the recording engineers, among them the choral Finale of Act 1, with organ, bells, and cannon to be accommodated, and the Prelude to Act III, one of Puccini's most original inspirations, with more bells, both sheep and church (and the voice of the shepherd boy) to be given the right perspective. These problems are satisfactorily solved in this recording which, everyone will be glad to know, is of the same high standard as its predecessors: the orchestral part is, indeed, the fullest and the best of the series so far, Erede gives a most dramatic and sensitive reading of Puccini's vivid score; and though the H.M.V. set of 1938 still sounds well, there is little of the richness and sonority we get here. In the old set the recording of Gigli's voice now seems hard, and Caniglia on that occasion was not in her best form. Campora, though he follows the bad tradition of singing Recondita armonia and E lucevan le stelle too loudly—in the latter aria he expends his forces before reaching the peak climax— sings with much dramatic force and fine ringing tone; his cry of Vittoria in Act II is splendid, and his groans under torture, thank goodness, are not exaggerated. Enzo Mascherini, the Scarpia, is able to dominate his scenes easily but, like Borgioli's performance in the H.M.V. set, he brings to the part little of the subtlety and irony that one remembers in Stabile's performance. He remains, in fact, the effective but conventional villain.

The small parts are all well done. Fernando Corena does not make the mistake of presenting the Sacristan as a comic turn, Piero di Palma is the evilly pious Spoletta to the life, and I have never heard the shepherd boy so well cast as here, A boy’s voice was used at Covent Garden, not I believe with much success, but this boy is not only heard, as directed, singing in the distance, but his voice has exactly the right timbre.

Tebaldi gives a magnificent performance as Tosca. Her Mimi and Butterfly were quite separate characterisations (which is the answer to the cheap gibe that Puccini's heroines are all alike: they are only that when played by second-rate artists) and her Tosca is different again. She never becomes a virago in Act I but tempers her jealousy with tenderness and sensuous charm.

In Act II she rises to really great heights and I shall long remember her contemptuous Quanto? as she asks Scarpia’s price, and her spine-chilling Guardami! Son Tosca 0 Scarpia . . . Muori damnato! Muori! as she stabs him. Earlier in this scene she sings Vissi d'arte with true emotion, lovely tone, and, thank goodness, with no histrionic sobs at the close. In the last act another memorable moment is her thrilling top C as she describes to Gavaradossi how she stabbed Scarpia. The whole Act is kept at the right dramatic tension and Erede brings out the full force of one of Puccini’s most telling themes, the one that accompanies the entry of the firing squad.

The off-stage orchestra playing the Gavotte in Act II is perhaps a little too remote (though this is a fault on the right side) and the balancing of Tebaldi with the chorus in the Cantata is not quite right. Her voice (she was, after all, a prima donna) should rise high and clear above the rest, but it is too much merged with them. Stodgy and too loud as the chorus is in the old Parlophone record of the Cantata, Meta Seinemeyer’s glorious voice is in the right perspective with it. These are small grumbles that detract little from the overwhelming success of this issue. It has expunged the recollection of some very poor "live" performances of the opera I have heard in recent years. It would be grand if Decca would now give us the Trittico, and La Fanciulla del West, which has far greater merits than is generally realised.

Decca's 1952 release of Tosca with Renata Tebaldi in the title role was to be almost immediately overshadowed in the public perception by the legendary HMV recording made the following year of the same opera, starring Maria Callas (Pristine PACO 080). As wonderful as that performance was, the Tebaldi Tosca more than deserves to be heard today - her excellent performance, as well as the ensemble sound, further enhanced here in this new Ambient Stereo XR remaster. 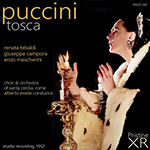