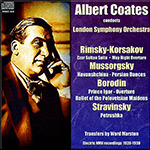 Hmm! Stravinsky! Now we're in for something weird!

"...Of Stravinsky on her programme, " Hmm ! Stravinsky ! Now we're in for something weird ! " What we actually were in for was the Berceuse and Finale of The Fire Bird, which, had the printer of the programme erroneously attributed to the pen of Rimsky-Korsakov, the good lady would assuredly have applauded as vehemently as she did Scheherazacle at the same concert. So much for the average Briton's attitude towards musical progress. Yet why should early Stravinsky still be imagined by so many to be so revolutionary and incomprehensible 7 The Fire Bird was written in 1910— surely nineteen years is sufficient time even for an average British concert-goer to assimilate its idiom. The answer must lie in the fact that ever since Petrouchka Stravinsky has been such an experimentalist, and his idiom has been so elusive, that his reputation is better known than his music, and so our conservative concert-goers get afraid, and refuse to become conversant with any form of music later than Wagner. To these I would say : "Ladies and Gentlemen, go to your gramophone dealer and listen to a few records of contemporary music ; it will cost you nothing, and you will gain the knowledge that there is nothing at all offensive in such works as The Fire Bird, nothing in fact that is incompatible with the traditions of Rimsky-Korsakov, Borodin and others ; then you will go to the concert hall and hear with unprejudiced ears the same works, and will enjoy them."

In 1911 appeared Petrouchka, which is still regarded by many as Stravinsky's masterpiece, though none can maintain that he ceased developing at this date. Certainly his later works are more abstruse and objective, but Stravinsky never stands still, he always moves forward, forward, forward, and even though his followers may sometimes be led into somewhat cacophonic by-roads, the discursions are always interesting, and open up new paths of development. Nevertheless Petrouchka is certainly the apex of his genius in multi-coloured orchestral resourcefulness, and it is probably the most musically influential of all his works ; hardly one of the younger generation of Russian Ballet composers has escaped the influence of Petrouchka in some form or another, and probably that is why it is the best known of his works. Stravinsky, as I have said before, changes his style so often that it is almost impossible to say which is the most representative of his works, yet to a grarnophile who knows nothing of this amazing composer's works I would recommend Petrouchka as his first introduction to Stravinsky. Two excellent sets of Petrouchka records are available ; one on six sides of Columbia (L2173-5), conducted by the composer, and the other on eight sides of H.M.V. (D1521-4) by the London Symphony Orchestra under Albert Coates. Both renderings are extremely - good the Columbia version is the noisier, yet I think on the whole the clearer and more supple, but I greatly regret the excision of the trumpet, flute and bassoon trio where the Moor makes love to the ballerina. I personally chose the H.M.V. version for its completeness."

"These Moderns 1.—Russia: Stravinsky and Prokofiev" (excerpts) by A. M. Gordon-Brown, The Gramophone, March 1930