"THE outstanding issue this month is the recording of Elgar’s Second Symphony in E flat by His Master’s Voice. The performance given by the B.B.C. Symphony Orchestra, under its conductor, Sir Adrian Boult, is too good to let the modesty of the B.B.C. prevent my saying so in the B.B.C.’s own Music Magazine. Anyway, the recording itself would make this issue memorable. After writing about the gramophone, month in, month out, for over twenty years, I have learnt to be cautious about proclaiming any recording to be the best ever, but I can certainly affirm that I do not know a better piece of orchestral recording than this.

Elgar’s Second Symphony was originally planned as a loyal tribute to King Edward VII, but it became his elegy, for the greater part of it was composed after the King’s death. Yet this symphony is something much larger than an elegy for an individual. Indeed, I would go as far as to call it the work of art which most completely expresses the whole Edwardian age, and in that age I include the last decade of Queen Victoria’s reign. Of course, the trouble of making that sort of claim for music is that nobody knows what a piece of music says to anybody else. However, we can be sure that Elgar did intend the second movement of the symphony to evoke the funeral of the dead monarch, and that he recalled in the music at least a couple of his own emotional reactions to incidents that occurred while the procession was solemnly passing through the streets of London.

On the Whitsunday before the war I went to see the late Kaiser at Doorn, and he said to me, “This will be Chestnut Sunday in Bushey Park. I remember how wonderful the chestnut blossom was when I was last in England, at the time of King Edward’s funeral.” All but thirty years had passed since those vivid blue eyes had seen the chestnuts of Bushey, but their glory had remained in the Kaiser’s memory, and in the music of Elgar’s Second Symphony for me those chestnuts are still in bloom. There is an example of how music affects the individual in a way which is incommunicable to others. Yet although those of us who love music and are old enough to remember King Edward’s funeral will probably all find different memories evoked by Elgar’s Second Symphony, we shall all be able to partake to some degree in the composer’s intention. What one craves to know is the emotional effect of this music on those to whom the contemporary setting means nothing. Elgar himself, round about 1920, was inclined to feel that he had outlived his date, and he was unduly sensitive about the tendency among the younger critics to decry his achievement. This sensitiveness was expressed by asserting that he no longer took the slightest interest in music. Ethel Smyth adopted the same line. I think this magnificent new recording of the Second Symphony must be accepted as evidence that Elgar need not have worried about his ability to speak to posterity."

This release brings together that 1944 recording of the Second Symphony with Boult's later, post-BBC recordings with the London Philharmonic of the Symphony No. 1 (recorded in 1949), together with the Enigma Variations and Nursery Suite (recorded in 1953 and 1955 respectively). Of these the First Symphony has appeared in an earlier, pre-XR transfer I made for the opening of Pristine Classical back in February 2005. Here the source has changed and the entire remastering process has been revolutionised; the restoration of the Second Symphony seemed as good a reason as any to return to the First. Although the Second Symphony belongs to an earlier age of recording, it stands up remarkably well to the other recordings here. Though it lacks the extreme high frequencies found in the later recordings, it more than stands the test of time, and in this Ambient Stereo XR remaster as surely never sounded as good - something which I believe can also be said for the other three recordings on this album. 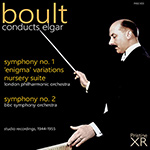