Tchaikovsky’s last symphony was written in 1893 and premiered with the composer on the podium. Nine days later Tchaikovsky died. The symphony was entitled Патетическая in Russian, translated into French as “Pathetique”, by which it is usually known in English. The title is ambiguous, the French term implies empathy or even pity, whereas the Russian word might better translate into English as ‘Passionate.’ The four movements have sometimes been interpreted as reflecting the passion of life that ultimately ends with a reflective finale.

As one might expect from a Russian émigré, Serge Koussevitzky conducted a vast amount of Russian music during his long tenure (1924-49) at the Boston Symphony Orchestra. He was particularly keen to promote the work of contemporary Russian composers whom he knew personally, including Rachmaninov, Prokofiev, Stravinsky and Shostakovich. He almost certainly conducted more of their music other notable interpreters of Russian music active in the US at the time (such as Stokowski and Ormandy). In contrast to the twentieth century Russian modernists Tchaikovsky seems almost old fashioned, yet Koussevitzky retained a love of Tchaikovsky’s music throughout his career. This almost certainly stemmed from his teacher, Arthur Nikisch, who was the most celebrated interpreter of Tchaikovsky’s music in his day, but we should not forget that Koussevitzky had met and played with Tchaikovsky in 1892 at a time when Koussevitzky was best known as a gifted double bass player. Koussevitzky made commercial recordings of Tchaikovsky’s 4th (1936 & 1949), 5th (1944) and 6th (1930) symphonies and there are several live recordings of these same three symphonies from NBC broadcasts of BSO concerts. There are three extant live broadcasts of the “Pathetique” symphony alone, from 1945, 1946 and 1947, the first two from Symphony Hall in Boston, the last from Syria Mosque in Pittsburgh. This issue of the 1946 broadcast, gives us the chance to hear Koussevitzky’s thrilling live interpretation of this symphony.

The symphonic poem Francesca da Rimini was composed in 1876. It tells the tragic story, recounted by Dante in his Inferno, of the damnation of an Italian noblewoman. Francesca da Rimini and her lover were murdered by her husband and condemned to an eternity in hell for adultery. It is a somewhat gloomy work, offering no prospect of redemption. Koussevitzky made a studio recording of this piece just a few days after the live broadcast heard in this issue.

Producer's Note
These recordings sound far better than they have any right to. Performances such as these were broadcast live from Boston's Symphony Hall via ABC studios in New York. The method of transfer from Boston to New York was simple - a telephone line. From New York they were both broadcast and cut onto acetate discs, from which these recordings were sourced. One would expect a much diminished frequency range, and yet at times througout both pieces the upper limit is not the 5Khz or so often yielded by such means of transmission but closer to 17-18kHz - a range greater than that claimed at the time by Decca for its Full Frequency Range Recording system. It's not always perfect - there are some slight peak distortions at times - but it is remarkably good. I've also been able to fix some often terrible wow and flutter which had dogged the Symphony throughout.
Andrew Rose 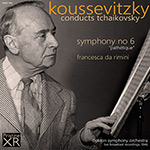 Oh, yes! Koussevitzky made a studio version of the “Pathétique” with the Bostonians in 1930. That recording was reissued by RCA Victor Gold Seal in 1992, and again by Biddulph a few years later. This, however, is a live recording from 1946. It has been on CD before as well; Music & Arts released it in 2004, with Aaron Z. Snyder doing the sonic reconstruction. It was not issued in the United States (copyright restrictions, I assume, although it is easy enough to find, even in the United States). Producer and transfer engineer Andrew Rose comments that “these recordings sound far better than they have any right to,” and I will not quarrel with that. These were live performances from Boston’s Symphony Hall that were transmitted to ABC’s studios in New York via a telephone line. In New York, they were broadcast and transferred to acetate discs (in which order?), and it is from those acetate discs that Rose has produced this new release. The sound is indeed excellent for 1946, although not quite up to studio standards. There is some peaking at the climaxes that Rose could not correct. He did, however, correct flutter and wow that probably would have made the music unlistenable. (I would have been interested to hear a sampling of the acetate discs before Rose worked his magic on them.) Comparing Rose’s and Snyder’s transfers, I find the former’s superior in their brightness and detail.

Koussevitzky’s studio recording of the “Pathétique” is no disappointment, and RCA was not wrong to reissue it relatively early in the CD era. However, it has its share of mannerisms, particularly in some of the tempo changes. This live performance, on the other hand, is more natural and spontaneous, and it crackles with an excitement not present in the studio recording. The last movement is uncommonly moving. There aren’t too many live Koussevitzky recordings around that do not require much patience because of their sonic limitations. The appearance of this one, then, is a real boon.

The conductor’s studio recording of Francesca da Rimini followed this live performance by less than a month. I am not able to hear any major differences between the two, and if you happen to have the studio recording (again, it was reissued on CD by Biddulph) then I don’t think there is a pressing need to acquire this Pristine release, if the Francesca is what you want it for. Both are wonderful, but I give the edge to Koussevitzky’s successor, Charles Munch, in this work—not just in the versions he recorded in Boston, but also in a hair-raising audiophile recording with the Royal Philharmonic, now available on the Chesky label.

This gets a strong recommendation from me, unless you already have the Music & Arts set and are happy with the sound—but I think you should hear Rose’s transfers before you make that decision.