Conductor and composer Max von Schillings (1868-1933) has been called a leading figure in late German Romanticism.  Born in Düren, he studied at the University of Munich along with Richard Strauss, whose operas he was later to champion.  His conducting career began with an appointment as an assistant at the Bayreuth Festival in 1892, where he was named chief choral director in 1902.  The following year, he was appointed professor of conducting at the University of Munich, where among his students were Wilhelm Furtwängler and Robert Heger.

Schillings first achieved success as a composer with his monodrama, Das Hexenlied, in 1904.  He composed several operas, the most successful of which was Mona Lisa (1915), a La Gioconda-like tale of love and intrigue in Renaissance Florence.  It proved to be an international success, being performed at the Metropolitan Opera in New York with Schillings’ wife, soprano Barbara Kemp.

In 1919, Schillings was appointed chief conductor of the Berlin State Opera, where he led the premières of Strauss’ Die Frau ohne Schatten, Pfitzner’s Palestrina and Busoni’s Arlecchino.  His removal from that post by the Weimar Republic’s Minister of Culture in 1925 precipitated the anti-Semitic Schillings’ turn toward ultra-right wing positions regarding “foreign” elements and Modernism in German culture.  He was courted over the next few years by the rising Nazi party, which appointed him president of the Prussian Academy of Arts in 1932.  In that position, he oversaw the removal from their posts of such “decadent” artists as Arnold Schoenberg, Franz Schrecker and Thomas Mann, a purge cut short by his death the following year.

Those willing to consider Schillings the musician apart from the flawed man will discover an interpreter whose conducting seems almost modern.  Like others of his generation – notably Weingartner (b.1863), Schalk (b.1863) and Strauss (b.1864) – his approach favored swift, flowing tempi with a minimum of string portamenti and willful effects (although he tended to slow down at the ends of recording sides, as many older musicians did).  A 1932 film of him conducting Rossini’s William Tell Overture, currently on YouTube, shows an aristocratic figure coolly leading a white-hot performance.  Schillings’ discography is heavy on Wagner; indeed, between this and the previous Pristine release devoted to him (PASC 228), all but one of his non-Wagner recordings for German Parlophon has been reissued.

The sources for the transfers were laminated English Parlophones for the Schubert; a German Parlophon for the Mona Lisa excerpts; and “Viva-Tonal” label American Columbias for the Beethoven.  The last is a particularly problematic recording, made in a small studio with a shrill midrange, hardly any bass, and an obtrusive hum in the first movement (which has been removed here).  It was set down after Parlophon had abandoned the Western Electric recording system in favor of its own proprietary technology in order to avoid paying royalties.  Those willing to listen past its defects will be rewarded with one of the most propulsive Eroicas of the 78 rpm era. 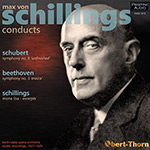