Outstanding performances - Doráti at his best

"...The performance has an infectiously extrovert quality about it... Dorati's memorable interpretation...Both "The Hero's Battlefield" and the work's close are quite overwhelming in their impact. Pristine's sound... is remarkably good"
- Rob Cowan, Gramophone, Nov. 2009

These two excellent recordings from Doráti are, we believe, appearing in a digital format for the first time. The main work here, Ein Heldenleben, was selected by the Antal Doráti Centenary Society as an 'outstanding performance' for their Society website, as well as their book Antal Doráti and the Joy of Making Music.

This remastering, from superb transfers from the Society's archive, highlights once again just how good those reknowned Mercury recordings of the 1950s were, capturing brilliantly Doráti and the Minneapolis Orchestra at their very best. From a remastering point of view this was a joy to work on.

Meanwhile the slightly older RCA Victor recording proved particularly interesting. The arrangement is somewhat unusual, made by Doráti himself, rather than the more commonly heard arrangement by Strauss himself - the two start to diverge quite significantly from about halfway through. And the recording, which came out on all three available formats at the time - 33rpm, 45rpm and 78rpm - has something of a shady past, with The Philadelphia Orchestra performing here under the pseudonym of the Robin Hood Dell Orchestra for contractual reasons.

Technically the sound quality does not scale the heights achieved two years later by the Mercury engineers - these were still very early days both for tape recording and vinyl replay - but even so, after careful restoration and remastering it does provide a remarkable and rare document of Doráti at this time.

Transfers from the Antal Dorát Centenary Society Archives
XR remastering by Andrew Rose at Pristine Audio, July 2009
Cover artwork based on a photograph of Antal Doráti 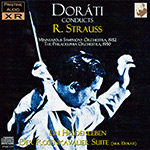 "...There is already a fine recorded performance available by Krauss and the Vienna Phil., well if not faultlessly engineered, in the Decca list: this new version is a worthy rival to it. Dorati, who is thought of in this country mainly as a ballet specialist, reveals that he is equally at home in vast concert scores such as this, and with the aid of his excellent Minneapolis Orchestra (which he took over in 5949) gives a reading which is full of vitality, shapely and admirably clear. Though the strenuous parts leave little to be desired, it is the reflective sections which are given a particular beauty—the composer's musings on his previous works, or his peaceful reveries (the cor anglais theme after figure 99 in the score). The strings of the orchestra are first class, and the solo violin not only well illustrates the changeable temperament of Frau Pauline but does so with purer intonation than his Vienna Phil. rival. On the other hand, the first horn's vibrato in the coda (figure io8) is excessive and spoils the line. The trumpets heralding the battle, by the way, are played off-stage as the composer demanded—a detail which Decca passed over.

What of the recording ? Mercury have a high reputation to uphold, and they are clearly proud of their " Living Presence" quality—though I do not understand how their use of a single microphone constitutes a "unique recording technique ". The tone of the orchestra emerges pretty faithfully (though without quite the roundness and weight of the Decca version), the disc surface is completely quiet, and the recording takes the full blaze of the shattering climaxes (e.g. the enormous dominant seventh at the end of the first section) without a trace of discomfort; but the microphone placing is not ideal, the woodwind being a trifle on the weak side throughout (and hence losing some of the bitter malice of the scharf und spitzig faultfinding) and the brass a little too near, so that they tend to be a bit blatant. Nevertheless, this is a very fine issue. It is odd that, as in the Decca version too, there should suddenly be a wow on the last chord." L.S.

From The Gramophone, November 1954

This is a fast, raw, and rugged Ein Heldenleben

The orchestra listed on this CD for the Der Rosenkavalier Suite is the Philadelphia Orchestra, but on the original RCA LP released in 1950 it was called the Robin Hood Dell Orchestra. For those of you who do not live in or around Philadelphia, the Robin Hood Dell was the summer home of the Philadelphia Orchestra. The Robin Hood Dell Orchestra therefore is the Philadelphia Orchestra. The name was apparently changed for this recording for contractual reasons. Richard Strauss’s Der Rosenkavalier Suite was such a favorite and specialty of Eugene Ormandy and the Philadelphia Orchestra that it typically appeared on nearly all of their annual request concerts chosen by the audiences in the 1950s. Antal Dorati is not usually considered to be a Strauss specialist, but he does have Straussian credentials. In fact, Dorati’s Suite from Der Rosenkavalier is more musically coherent and dramatically effective than the composer’s own suite. Combine that with the incredibly luxuriant sound of the vintage 1950 Philadelphia Orchestra, and you have a match made in heaven. Dorati drives the music a little too hard (at least for some tastes) in his later and better-sounding stereo recordings with the Minneapolis Symphony Orchestra (Mercury) and the Detroit Symphony Orchestra (Decca-London). That is not the case here. The opening horn call virtually explodes, but Dorati relaxes in the “Presentation of the Rose” music, and the Trio is simply gorgeous as it builds to an expansive climax at a perfectly judged tempo. Dorati’s ballet expertise serves him well with the waltzes, and the finale of his suite crackles with excitement. The sound has adequate presence and the engineer captures plenty of spatial information. There is never any doubt about the unsurpassed tonal richness of the Philadelphia Orchestra’s strings, even if it is a mono recording. Dorati’s later Mercury version has far superior stereo sound, but there is really no comparison between the Philadelphia Orchestra and the Minneapolis Symphony Orchestra. This performance was a unique recording event that is special. No Straussian should be without it.

Dorati’s 1952 Ein Heldenleben with the Minneapolis Symphony Orchestra originally appeared on a Mercury Olympian LP. So, it represents mono sound at its best just prior to the dawn of the stereo age. This is the time when Mercury electrified listeners with their single microphone recording technique and played an important role in establishing the world of high-end audio. As I have said previously, the opening section of Ein Heldenleben frequently defines how an interpretation will go, and so it does here. Dorati is swift and urgent, with remarkable forward thrust. It sure isn’t expansive, but it works dramatically. The cutting sound captures the wind and brass interjections in “The Hero’s Adversaries” very effectively. “The Hero’s Companion” is taken pretty fast as Dorati underplays any romantic sentiment, but it works because of the sweet and precise tone of concertmaster Rafael Druian. It is no wonder that he went on to become the concertmaster of the Cleveland Orchestra and the New York Philharmonic. “The Hero’s Battlefield” is ferocious. The rambunctious trumpets create a raucous cacophony that will be a little too much for some listeners. The trombones aren’t particularly subtle either. Dorati makes his interpretive points with a decided edge, aided by Mercury’s aggressive sound. The ending, again led by Druian, is lovely, though the French horn player is a little too tentative and wobbly. He isn’t helped by a trace of wow. There is a massive timpani roll over the final cadence. There are some other problems. The trumpets are simply too far forward and blatant at times.

The pause between the serene ending of Ein Heldenleben and the loud opening of the Der Rosenkavalier Suite is far too short. The effect is jarring. The materials as I received them include a functional front cover showing a picture of Dorati conducting, a back cover with a description of Ein Heldenleben apparently taken from Wikipedia, and the CD housed in a sleeve. You will need an empty jewel box to complete the package. More interesting and extensive program notes are obtainable at www.pristineclassical.com.

With this being recorded in mono (but with no associated lack of dynamic impact), it will not likely be your primary choice for Ein Heldenleben. Nor should it be with excellent sounding versions by Fritz Reiner (RCA SACD) and Zubin Mehta (Decca-London), among others. This is a fast, raw, and rugged Ein Heldenleben that will not appeal to everyone, but for those who like Dorati’s approach, it also will be special. Now, how about more of the innumerable treasures from the Mercury Olympian catalog?