Toscanini sets Brahms on fire in this stunning performance

With quite astonishing sound quality from XR remastering it's sensational!

Every so often when working on historic recordings, something comes along which is both entirely unexpected, and totally blows you away - this is one of those recordings. A last minute choice for restoration when another recording turned out to be impossible to restore (for technical reasons in the copy I'd received), this Toscanini recording had been lurking, unheard, on a tape in a pile at the back of my studio for several months, awaiting my eventual attention.

As soon as I wound the tape onto the Revox spools and started to listen I realised this had the makings of a good recording from a technical point of view. Clearly a clean dub from very clean master discs, surface noise was very low, and any clicks clean, low level, light and intermittent. Furthermore it was a very well-made recording, with the acoustic of Carnegie Hall to my ears far preferable than the more usually heard Studio 8H. The audience were so inaudible that at times I wondered if there was one (an occasional distance sound between movements suggests there was), and the announcer was back on the microphone at the end of the piece with no applause present at all.

To all intents and purposes, then, it was on a par technically with a good "studio" recording - and indeed the following day Toscanini and the orchestra returned to the hall to make a series of commercial LP recordings, so we can I hope assume that this used the same technical set-up.

If there were shortcomings in the sound, these were certainly a result of the not-quite-flat tonal response of the microphones used at the time. Though better than those Decca were using at the very beginning of the 1950s, there's still something not right about the direct sound, typifiied by mid-range congestion and a boxed-in top end. This too is music to my ears, as it's ideal material for XR remastering to tackle - a basically well-made recording with tonal imbalances - and the results speak for themselves. The sound is full, rich, brilliantly well-balanced, and with Ambient Stereo too, a delight for the listener.

All of this would be secondary if the performance was merely average, but it's not. Toscanini zips along at quite a pace, clcoking in at under 36 minutes in a symphony which regularly takes over forty - yet he doesn't sound hurried to me, and his finale is one hundred percent Allegro con spirito! This doesn't mean his attention to detail and fine nuance is in any way compromised - and I've rarely been moved by this work as much as I have been by this performance, which at the time of writing I'm just going to have to listen to again, one more time...

The 1/4" tape transfer of broadcast discs used for this transfer is understood to
have been sourced directly from the Toscanini family archives.

Transfer and XR remastering by Andrew Rose at Pristine Audio, April 2009
Cover artwork based on a photograph of Arturo Toscanini 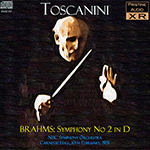