An astonishing collection of historic recordings

This remarkable collection of early cylinder-based recordings of music by Sir Arthur Sullivan came to me via my colleague Peter Harrison, who happens to be a near-neighbour of Mr. Roger Wild. It was Roger who had produced a limited edition of these rare cylinders on a CD for subscribers to the Sir Arthur Sullivan Society, utilising transfers from both his own collection and that of Mr. Dominic Combe.

Mr. Combe is one of the few lucky individuals who owns an "Archeophone" - the crème de la crème of modern cylinder players, a vastly expensive device capable of the optimal reproduction of just about every cylinder format and speed known to exist - and it is to him that we offer enormous thanks for the incredible quality of the transfers heard here, which audibly surpass almost all transfers we've heard.

That original limited CD issue used direct transfers, with minimal 'interference', and the sound is much as one might expect from early acoustic horn recordings - thin, at times strident, with a clear 'horn' tonal characteristic. This offered little insight into what we were to discover when Peter asked me what I might make of one of Roger's more troublesome cylinders, "Here's a How-De-Do", in which Roger had been unable to make out the words behind the surface noise on this highly rare and important historic artefact.

I began work on this (and, for reference, a handful of the cleaner transfers) about six months ago, and soon discovered far more detail captured on the cylinders than anyone had a right to expect. In short, they showed greater clarity, and far greater frequency range than their flat, 78rpm disc counterparts. Whereas the average acoustic 78 might have a range of between about 250Hz and 3500Hz, some of these recordings were clearly capturing sounds right down to the 100Hz bass area and up to almost 10kHz, something even electrical 78s had trouble with. Was the 160rpm* cylinder a "Betamax" to the 78rpm disc's "VHS" after all? These recordings suggest it was...
(*A typical speed of these recordings was ~160rpm, though cylinder speeds varied hugely - the Archeophone handles 44rpm to 238rpm.)

We've presented here the same recordings in the same order as on the original Society CD (the original sleevenotes for their CD can be found on our website), but each one has been through an intensive remastering and restoration process to enhance frequencies captured above and below those which were apparent on the original issue, and to smooth out and equalise the tone to remove the sonic imprints of the recording horns used.

The results, whilst continually astonishing and lifelike, will of course also highlight some of the shortcomings of the medium - one really cannot expect a full CD of modern quality recordings from acoustics made up to 110 years ago. So yes, there is evidence of hiss, distortion and other background noise in varying degrees in these recordings, despite my best efforts to minimise them. But also in this remarkable issue, for perhaps the first time ever, we have a far more honest representation of some of the oldest musical recordings in existence.

Recordings from the collections of Roger Wild and Dominic Combe

Restoration and XR remastering for this issue by Andrew Rose at Pristine Audio, February 2009
Cover artwork based on a photograph of Sir Arthur Sullivan 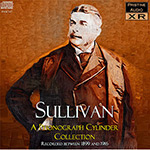 Sir Arthur Sullivan's music fared well at the hands of the phonograph, with around 300 cylinders being recorded. Some were never publicly released, others do not appear to have survived, some can still be encountered with a search and good fortune, and some (usually the later issues) are still met with quite frequently in collecting circles. Presumably because of his reputation as a composer of light music, his output is quite well represented with examples of his hymns, songs, orchestral music, grand opera, comic opera, and arrangements in the form of lancers, waltzes and marches all appearing. It is true that only one in some of these categories is to be found, but few other composers can boast such a broad spread in the phonograph companies' catalogues.

This CD (complimentary with the Sir Arthur Sullivan Society Magazine) contains examples of all of these groups, as well as a wide range of recording dates from 1899 (the earliest days of phonograph records) to 1916 (anticipating the slow demise of the cylinder format). The author of these notes has found much to enjoy listening again to this compilation, from "The Rose of Persia" selection, recorded during the original Savoy Theatre run, and the early "Here's a How De Do" from 1902 with the earliest example of a recording of Gilbert's dialogue, to the "Di Ballo" overture, with its fine playing and seamless musical cuts, and the wonderful "Mikado" lancers with the announcements, and arrangements to make the music fit into the rigid dance pattern.

The CD is meant to be listened to in conjunction with the listings in the SASS Magazine. Some points to listen out for when playing the CD are Track 1; this selection from "Ivanhoe" contains the earliest recording of the "Plantagenesta" chorus, and interestingly includes the orchestral playout, which closes Act One.

Track 2; which includes not only the dialogue, but an encore as a filler (reflecting a performance tradition from the earliest days, right up to modern times.)

Track 9; the use of Gilbert's original words in the opening chorus, reflecting his original idea to make the Pirate King the servant of the pirate band.

Track 10; the use of non Sullivan music as padding!

Track 22; the sympathetic cuts to enable the music to be fitted onto this four-minute recording. A complete rendition takes some eleven minutes.

Extraneous noises can occasionally be heard. Track 3 contains vocal encouragement by the recording engineer, and on Track 26 the conductor can clearly be heard tapping the music stand to start. Listeners will no doubt find other points of interest, (although the Mikado lancers do not really make for repeated listening!) and I do hope you enjoy this venture into Victorian and Edwardian sound, and form an understanding of the dedication and skills of long gone - yet not totally forgotten - performers.

The 26 tracks on this CD are presented in an entirely random order, without heed to date of recording or type of cylinder. The aim is to give a broad spectrum of Sullivan's music to show what was available to the record buying public in the Victorian and Edwardian eras. The "Ivanhoe" selection - newly discovered - was chosen as a good lead, and "The Long Day Closes" makes a fitting final item, reflecting the demise of the phonograph. Transfers of cylinders to CD format are not common, and most of these recordings have not been issued on CD until now. In these days of complete opera recordings, with much scholarly attention being given to original scoring and authentic performances, it is easy to forget that the cylinders here were the latest and best available recordings. It would be perfectly natural for a family, having seen a touring D'Oyly Carte company production, to buy an "Airs from" cylinder as a reminder of a special evening out. No matter that the music was not authentic, the singers not credited, nor the songs incomplete - it was just so wonderful to hear the music at home. Now, some hundred years later, we can all enjoy them and hear them in a way never dreamed of by Savoy audiences - the Archeophone really digs the music out of the grooves - it's all in there, but we've never been able to get at it before!

A NOTE ON THE ARCHEOPHONE

A twenty-first century solution for a nineteenth century product. The wonderful Archeophone, created in 1998 (one hundred and ten years after Edison's invention!) plays all wax and celluloid cylinders made between 1888 and 1929, and allows them to be instantly transferred to CD. It is manufactured by Henri Chamoux of Paris, and is now used by all major sound archives, including the Library of Congress, Bibliotheque National de France and the Edison Historic Site. It plays cylinders with speeds ranging from 44 rpm. to 238 rpm., with a silent electric motor and modern stylus (the original phonographs have a clockwork motor and acoustic reproducer) and it can even compensate for eccentric and warped cylinders using sensors which stabilise the rotation of the cylinder on the mandrel.

We can now hear the cylinders in all their glory, and most certainly much better than in the phonograph era. There are just over 20 of these machines in existence, and I have been very fortunate indeed to have had the use of one for this project: the improvement in the listening experience is truly remarkable. 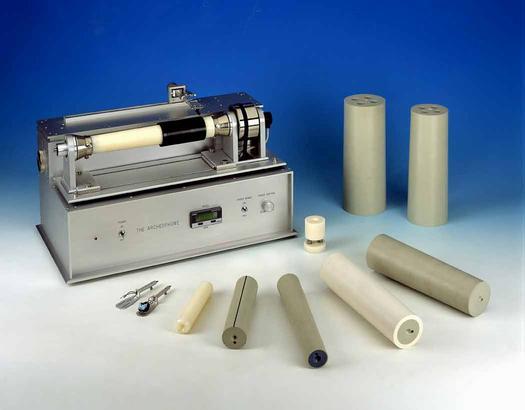