Part One of Toscanini's Legendary 1936 Broadcast

This recording was original preserved on acetate 78rpm discs, almost certainly recorded from an AM broadcast. Thus we have a limited dynamic and frequency range and some surface noise to deal with. That said, I'm particularly pleased with the outcome of this recording - despite some residual surface crackle evident through the first movement, the sound is listenable, enjoyable and engaging.

I was also able to tackle one major problem:

The original recording of this concert omits approximately twenty seconds of music during the second movement, lost (it would appear) at a side change of the acetate discs. In order to preserve continuity of playback here we've digitally "aged" a modern recording of this section of the music and blended it seamlessly into the 1936 recording. This involved first matching precisely the pitch, tempo, frequency response and average equalisation curves of the two recordings, then blending in surface noise from elsewhere on the older recording to give the illusion of total continuity of music and replay sound.

The movement in question has been chosen as our sample excerpt recording, and you can judge for yourself the success of this work - at least one successful remastering engineer was unable to detect the start of the drop-in during casual listening tests prior to release.

NB. A short section of the 2nd movement was missing from the original recordings, and an alternative recording has been edited in to preserve continuity - see producer's note  for details. 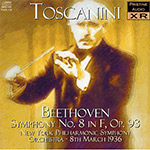