Following a number of requests, we decided to add this recording of Parsifal to our 1953 Krauss series, following the huge success with his Ring cycle, reissued here over the last few months - "...this enterprising remastering by Pristine Audio goes a long way towards countering those objections [on grounds of sound quality] and will for many permit this famous cycle to take its place at the head of a long line..." (MusicWeb International).

I noted an improvement in sound quality through the Ring cycle - one assumes that after each performance the engineers would have had opportunity to fine-tune both their equipment, its location and its settings. The Parsifal concert, which predates the Ring by a couple of weeks, would not have had that advantage. (I should note here that the date is based on detective work by a number of experts, who agree that it is most likely a recording of a transmission by Bavarian Radio, who broadcast the first performances of all of the Bayreuth Festival at that time in the 1950s - though he did conduct the opera twice more with the same cast, on 2nd and 15th August.)

Thus technically we're more or less at the same stage of development as Das Rheingold, with a sound which is at times not as up-front as might be liked. The recording was also quite hissy in places, and for lengthy periods suffered from a high-pitched whine, rumbling bottom end, mains hum and other assorted faults, all of which I've endeavoured to either cure or alleviate considerably.

I will refrain from commenting on the performance itself beyond a personal if rather uninformed view that I enjoyed it - I'm sure far more experienced and erudite commentators will no doubt bring great experience to bear over the next few weeks, and excerpts from the critics will be added to this page as they become available. However I do feel adequately qualified to make specific note of the remarkably swift pace at which Krauss moves in this, his first concert appearance at a Bayreuth Festival:

I used as musical and tonal reference the 1973 Decca recording of the opera with Solti - this also served as a template for my track markings (always a tricky job when music is as lengthy and continuous as here). Placing the two recordings side-by-side it was immediately apparent that there was a huge time discrepancy. Solti comes in a full 25 minutes longer than Krauss at 4hr 20min to Krauss's 3hr 55min. The swifter pace here is to be found throughout the opera - almost every track (and we've selected the same in points for each of the 47 tracks here as with the Decca CD issue) comes in quite a lot shorter, yet there are no (apparent) cuts or changes to the score (naturally - this is of course a Bayreuth production!).

A quick scan of other recordings shows this to be perhaps one of the swiftest Parsifals ever recorded - checking out the information in my Gramophone Good CD and Download Guide I find the next fastest to be Knappertsbusch's 1962 recording - widely regarded as the benchmark - which is some 15 minutes slower at 4hr 10min. Thereafter we have Karajan (1979/80) at 4hr 16min, the aforementioned Solti, and slowest of all, Thielemann (live, 2005) at 4hr 22min.

How this will play with the experts I will be very interested indeed to see - but if you like your Wagner crisp, swift and with a superlative cast, many of whom went on to deliver one of the finest Ring Cycles of all time, then this recording is surely one for your consideration. 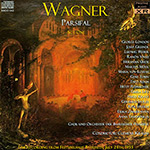