"When Artur was contracted for the job of putting together the new orchestra, he quickly learned that NBC intended merely to augment its existing radio group, perhaps picking up a few good new men who would only play Toscanini's concerts. As soon as Artur understood that this was NBC's thinking, he sat down and wrote a long memorandum to David Sarnoff, president of Radio Corporation of America, NBC's parent company. In it he carefully detailed all the reasons why an orchestra so composed would never satisfy Toscanini. Such a conductor should not be asked "to perform with a second-rate fiddle," Artur reasoned, and NBC's management agreed, but only after long detailed conversations was my husband given the carte blanche he required to fashion a first-rate instrument for his beloved Maestro.

Sarnoff himself authorized Artur to build a new ensemble that would work on a permanent, year-round basis. He told my husband, finally, to engage the best musicians he could find anywhere, to offer whatever was wanted to tempt them to leave their permanent positions. Not much temptation was often required, however, since most players were then not only anxious to live in New York but also willing to play under Toscanini's direction even at going rates of pay.

Artur was, of course, in his element. Probably due to a strain inherited from his father, Artur was a born Chief of Staff, a methodical organizer. In no time at all he was auditioning. Since he had led most of the orchestras in the United States, he knew precisely where to look. Also, Hitler had put a number of first-class players at Artur's disposal. In a matter of weeks he had heard everyone worth hearing and had begun to make his final selections."

After four broadcasts of very varied repertoire, this fifth concert of the NBC Symphony Orchestra - the second of three to be conducted by Rodziński before Toscanini's first broadcast - was the first to indicate the possibility of themed concerts. Its all-Russian programming would be echoed five months later with Boult's all-English broadcast of 21 May 1938 (PASC626), and Rodziński himself would return at the start of the second season with another all-Russian programme almost exactly a year later. Toscanini himself would instead programme two single-composer broadcasts that first year - one concentrating on Beethoven, a second on Wagner.

It has already been remarkable to hear in our releases of the four preceding concerts just how well-prepared the NBC Symphony Orchestra was right from the beginning, and here we hear yet another superb example of this, with some thrilling music-making on display here. Once again the sound preserved from these 85-year-old broadcasts is astonishing in its fidelity and clarity of detail - a truly engaging and often exciting listening experience!

RODZIŃSKI at the NBC Vol. 2

XR Remastered in Ambient Stereo by Andrew Rose
Cover artwork based on a photograph of Artur Rodziński and Arturo Toscanini
Broadcast of 11 December, 1937 · Special thanks to Richard Rodzinski 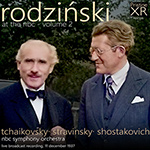