The classic 1956-57 Klemperer Brahms recordings, made with the Philharmonia Orchestra by EMI in London's Kingsway Hall, have long been regarded by many as perhaps the finest ever made. Happily the EMI engineers opted to record in stereo, at a time when far too many recordings were still being made in mono, and stereo reproduction in the home was limited to a very narrow range of open-reel tape machines.

For the day, the recordings stand up reasonably well, though as the 1976 review above demonstrates, as little as twenty years later they were showing their age, and so it's little surprise that 55 years after the event Klemperer's Brahms comes across as a little faded and dusty, if only in sound quality.

Happily this can now be rectified to quite stunning effect. 32-bit XR remastering has served here to bring a quality of sound unimaginable in 1957 to these recordings, shedding decades in the process, and revealing a depth, vibrancy and dynamism that previous issues simply failed to convey.

XR remastering by Andrew Rose at Pristine Audio, October 2012
Cover artwork based on a photograph of Otto Klemperer 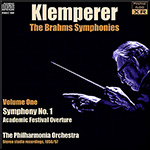 Klemperer was at the very peak of his powers as a recording conductor when he made his Brahms cycle for EMI. For some time now the cycle has been available in a competitively priced box, but it is good to have the separate symphonies available on the mid-price Concert Classics label. In this account of the First Symphony it is thrilling to have Klemperer's direct approach to Brahms presented at once with such sympathy and with such relentlessness. I had almost forgotten just what degree of power and intensity there are in the outer movements, and what refined playing from the Philharmonia Orchestra at its zenith, with superb string ensemble and magnificent solo work all round, not least from Alan Civil (I presume) on the horn in the last movement. And though the recording has not the luminous depth that you would expect of a modern recording, it is beautifully balanced, and Klemperer was a master at clarifying Brahmsian textures.

This version has long held its own at full price in the catalogue, and it still has claims to being the finest performance available. In practical terms there are now two strongly competitive versions - Loughran (CFP40096, 3/75) on a much cheaper label with good modern recording and a warmly vigorous, if less polished, performance, and Horenstein on the new RCA Gold Seal label (GL2500I, 10/76) presenting another direct view but one which allows more affectionate moulding of phrase, with bright clean recording. But Klemperer's white heat makes his more obviously a classic account.