PROKOFIEV The Love for Three Oranges

One of only four Russian-language recordings - new XR-remastered transfer

Transfer from Philips ABL.3150/51
XR remastering by Andrew Rose at Pristine Audio, September 2010
Cover artwork based on a photograph of Prokofiev 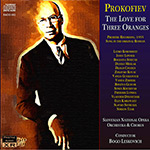